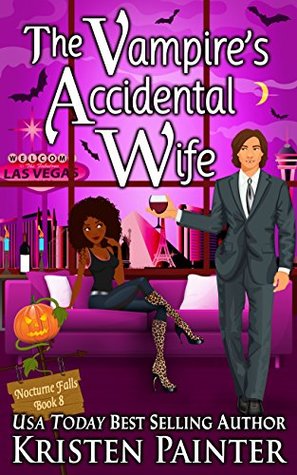 Las Vegas headliner and vampire Desdemona Valentine is one cool, collected diva on the outside. On the inside, she’s petrified of falling in love after her last relationship nearly killed her...literally. Protecting her wounded heart makes for a lonely life, but she has her fame and fortune to keep her company. Who needs anything more?

Julian Ellingham does. One look at Desdemona on stage, and the vampire is smitten. She initially ignores him, but his relentless pursuit pays off when a wild night ends in a Vegas wedding. Finally, Julian has everything he wants while all Desdemona wants is...a divorce.

Julian sweet-talks Desdemona into letting him prove his love, but his time is running out. Especially after someone repeatedly tries to turn his bride to ash. When Desdemona flees Vegas for the spooky streets of Nocturne Falls and Julian’s protection, he’s more than willing to help out. But can he convince Desdemona to trust him, or will ‘death do us part’ become a reality?

I have been waiting for Julian's story since the first Nocturne Falls book, so finally I got his story.
I think I had such high expectation that in some degree, I set myself up to be disappointed. In some aspects I was, but in others I was more than happy.
I really enjoyed the story line. I like the 'accidental" marriage part. But I really wish there would have been more parts with the family. I loved the bits that we got, I wanted more. Then add to that, during the big show down, none of them seem to have been informed. I kept wondering where they were? Cause let's face it they would have railed around Desi, wouldn't they? Found a bit odd they were not informed.
The second bit that I found a bit underwhelming was Desdemona's reason. Her actually story. I mean I got it, it was horrible but it was like 100 years ago and I didn't understand why she held on to it so long...

In the beginning I wasn't quite sure how I felt about Desi, I kept thinking she better has a good reason and her dressing style? Uhm, yeah, well let's say we don't see eye to eye. But she more than grew on me. While I didn't quite feel her pain, I do get her fear of new commitment. I loved that she turned out to be loyal and caring. I loved the friendship between her and Julian. Their relationship was beyond endearing. It's not really swoony romantic but so much more heartfelt, it has much more depth.
I still adore Julian. Though I was surprised he didn't push/pursue his interests a bit more. But I adore on the other hand, that he respected Desi's wishes and that he cared enough to let go.
The support cast was fantastic- as always. I feel like they getting better and better each book. It is one of my favorite things about the series. Painter seem to excel at it more in each book.
I can't wait to read the next book simply o revisit them all.

Just like all the other books in the series this is well written and thorougly enjoyable. Somehow Painter manages to throw in some awesome world building, loads of interesting character but keeps it still light hearted and sweet. Just the right balance of things to make this a captivating book. In fact I read this in one sitting, it's that enjoyable.

A great addition to the series. And now I am hoping the next book will be released soon (as well as wondering who will be featured..)