Review: I'm Not in the Band by Amber Garza 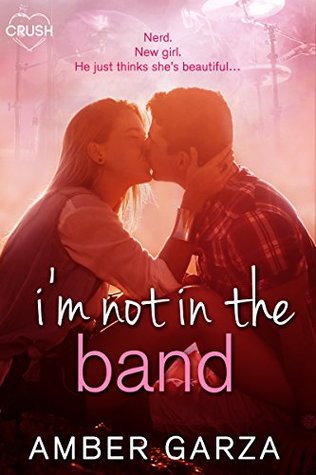 I'm Not in the Band

I like Kassidy Milton. There, I said it. She’s funny, beautiful—even though she doesn’t know it—and my favorite kind of weird. But I can’t tell if she’s into me or just trying to get close to me for a chance with my famous twin brother instead. I mean, it has to be me. I am the better-looking one.

But Kassidy has some demons, and she’s not good at letting people in. That happens when you’ve been hurt by someone close to you. I can relate. Trust is a funny thing; it’s hard to gain but easy to lose. I might just learn that the hard way.

I'm Not in the Band is cute but not as fluffy as I initially expected.

This is my first book by Garza and I really like her writing style. The story is told from Kass and Archer's POV. While Kass's POV is told in the first narrative, Archer's is narrated through social media posts and messages. At first, I was kinda worried that I wouldn't like Archer's POV... but very quickly I realized I totally adore it. It's a very interesting and quirky way to tell a story. Not an easy choice, but Garza nailed it. One of the things I loved most about Garza story telling was the sense of humor.

Going back to the fluffy part. As I said this is cute. It has its fair share of melodramas. It's packed with teenage insecurities, but it also does touch on some heavier subjects. I did enjoy the story line and kept wondering at the "mystery" though by the time we got the "reveal", I had figured it out. I like the subject and I genuinely got where Kass was coming from. I experienced the same with a friend, so I know the shock when it happens. I could totally relate to many of Kass feelings.
There is no deep analyses or great solution in this book. Which was fine by me, it is after all a cute romance novel. I do however feel that there was this huge build up to the reveal and then things were "sorted", the end. It felt a bit rushed and retrospectively I'm not even sure if the situation was actually "handled".

The character building is great. I love- nay ADORE - Archer. I liked Kass. They both a bit melodramatic, there is plenty of dramas between them, yet while Garza pushed the melodramatics, she didn't push them too far IMO. We talking teenagers after all. I quite like the siblings' tensions. They are relatable. I mean we all have some sort of odd rivalry/ insecurities when it comes to our siblings/ families during our teens, thankfully most of us do resolve them then as well... It gives the book the unexpected depth I was talking about right in the beginning.
My biggest issue, however? The female support cast. With the exception of a couple, they are all horrible. Even Kass sister is kinda superficial, or at least she seems like it in the beginning. It's like all the teen girls in this novel are super good looking and manipulative, opportunistic and quite underhanded. Like every other girl is only interested in Archer because of his brother? Really?? That's just sad.

Well written novel, that made me smile and laugh quite a bit. Great male lead, totally swoon worthy and some interesting subjects.
In three words: Cute, funny and quirky.