Review: Trusting You and Other Lies by Nicole Williams 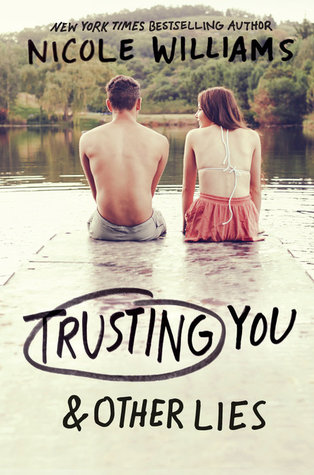 Trusting You and Other Lies

Phoenix can't imagine anything worse than being shipped off to family summer camp. Her parents have been fighting for the past two years—do they seriously think being crammed in a cabin with Phoenix and her little brother, Harry, will make things better?

On top of that, Phoenix is stuck training with Callum—the head counselor who is seriously cute but a complete know-it-all. His hot-cold attitude means he's impossible to figure out—and even harder to rely on. But despite her better judgment, Phoenix is attracted to Callum. And he's promising Phoenix a summer she'll never forget. Can she trust him? Or is this just another lie?

It is cute and all, but it is more of a coming of age story than a romance, despite the fact that the romance is the leading storyline. See in the end it is about trust and second chances, and also love. All of these things do go hand in hand after all.

The good news however is, this is a summer camp romance. While there are some big issues being tackled by Phoenix, there is also plenty of swoony stuff going on.

The character building is rather well done.
I absolutely adore Callum, his seriousness and his sweetness! Phoenix does a lot of growing up during her summer in camp, she also does a lot of teenage mistakes and her black&white views were a bit infuriating. However, I also understood her, I think most readers will be able to relate. I also made me think that once I saw many things as black&white myself and the word compromise was at times non-existent in my vocabulary. But more so I remember not seeing someone else POV as a teenager, simply because I couldn't see it in that moment. I think learning that is one of the most important things growing up.
The support cast is interesting and while some parts are your usual usual, I like the family dynamics. I love how it's totally imperfect but so real and with lots of heart, no matter how Phoenix feel about it.

I think, I should mention, that I am writing this, straight after reading the novel. Trusting You, left me philosophical and swoony. I think this means Williams did a fantastic job.
Some beautiful, insightful moments but also lots of cute & fluffy makes this the perfect summer read in my opinion!