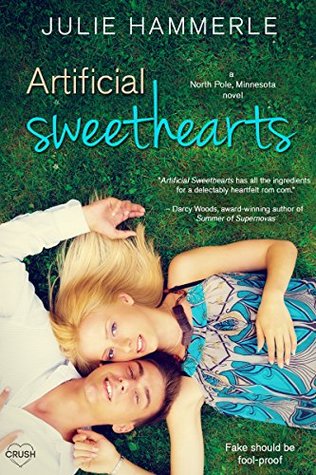 It’s not chemistry between Tinka Foster and Sam Anderson that made them agree to fake date. With her parents trying to set her up with an annoying pro-track golf student, and intentionally single Sam’s family pressuring him to bring a date to his brother’s wedding, they could both use a drama-free summer.

So it’s not his muscular arms and quick wit that makes Tinka suggest they tell everyone they’re both taken. Definitely not. And it’s not butterflies that makes a kiss for appearances during the lake party go on way too long—so long that Sam wishes it were real.

But Tinka keeps people at arm’s length—she’s always been second best, even to her parents. And her relationship-for-show could crush everything when she realizes she’s done with fake, pretend, and second-best.

Disclaimer: This Entangled Teen Crush book contains bikinis at the lake, a lot of making out in dark theaters, and a meet-cute you’ll read twice.

Artificial Sweethearts is the second in the North Pole, Minnesota series. And while Any Boy But You was the perfect winter holiday read, Artificial Sweethearts is the perfect summer vacation cute & fluffy. And that's where their similarities end. Well, that's not quite accurate: they both set in North Pole, Minnesota. They both cute & fluffies. And they have some of the same characters. But they both can be read independently and work as stand-alones.
I actually love this. While the story is written from two different characters, people we didn't actually get to know in the first book, there is a similar feel, the town's quirky-ness is the same. Some of the characters reappear as well, and they feel the same, even though they seen through different eyes and we see a different side to them because of it.

While the support felt a bit flat in the first book, I liked the character building this time around just fine. I love the support cast and adored the MCs. Well, I adore Sam. Sam is your nice guy. He isn't your usual usual male MC. No bad boy, he is not a player or a jock.. nope he is the nice guy next door. And I totally fell for him. His insecurities, his loyalty, his sweetness and his caring nature. Total winner. Also kind of refreshing to not reading about a reformed bad boy.
Tinka was a bit, well, selfish and self-absorbed in the beginning. But she does change over the course of the book and I grew to care for her. I love how the girls have real girl quarrels but I love the way they deal with it even more. While this is a swoony lighthearted kind of book, Hammerle add a rather heavy topic to the story. Yet it doesn't make it less lighthearted, it does however give it more depth.

The storyline is the faking it until you make it kind. And absolutely perfect cute & fluffiness.
Which brings me back to what I said right at the beginning: This is a summer vacation must read.