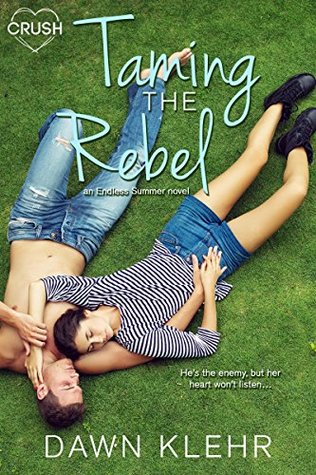 Rebel Hart should be at home taking care of her father after his breakup with his boyfriend, not tromping through the woods at summer camp. He’s had his heart broken beyond repair, and the way she sees it, there’s only one person to blame—the boyfriend’s son. So when that infuriatingly gorgeous quarterback turns up at the same camp, she plans to make him pay.
Justice Brody isn't happy about trading training camp for actual summer camp. But if he wants to stay on the football team, he has to show that he can be drama-free. He welcomes the anonymity that comes with summer camp…until he realizes the one girl who knows him better than anyone is there, too. Rebel is off-limits, impossibly beautiful…and trouble with a capital T. Still, he can’t stay away. And even as Rebel exacts her revenge, in several very embarrassing and painful ways, neither can she.

Disclaimer: This Entangled Teen Crush book contains pranks, adult language, and kisses that will make you wish for a summer romance of your own.

This took me forever to read, simply because I found barely time to read. I was traveling on my own in Europe and Taming the Rebel was my traveling companion.
In those moments when I found time to read, I savored my time with this cute & fluffy.
And let me tell you, it's a great travel companion and a fab summer read. It was my companion in the city of love- aka Paris, I felt it was super appropriate to read about their budding romances their little adventures..I wouldn't have wanted to read anything else but something super cute.
Taming the Rebel is just that. Cute. Lighthearted. Swoony.

It's well written with a good dose of humor and alot of insight. To be honest, at first I felt a bit like Klehr is doing the let be open-minded kind of thing, when I found out about Rebel's family. I didn't mind but I didn't care for it either. But as the story went on, I actually liked how she handled the situation and how she showed Justice's struggles with it. She managed to show the difficulties he faced without being judgmental or opinionated. It was just stated. And in fact this is what endeared me to the book even more at the end. Because while, this theme is often picked up these days, I think it is seldom dealt with so elegantly and without putting the authors opinion into it. Really well done.

I adored Justice from the get go. His POV is awesome, I could connect with him instantly. Rebel, not so much. I found her extremely opinionated, though she is a stickler for being open minded, which is exactly what annoyed me. I found her hypocritical in many ways and though she claims to be open, she did only see her point of view, in my opinion.
But as the story went on, she grew on me, alot. I ended up loving them both and was invested in their story.

The story line is probably the usual usual- well except for the family situation- enemies to lovers being one themes, there are a few more popular YA themes in here. But the romance was cute and there were some super cute moments, so I didn't care that it wasn't the most inventive story out there. I might have even sighed a few times....

Tested and proved to be a great travel companion and perfect summer romance. A must read for lovers of the genre.