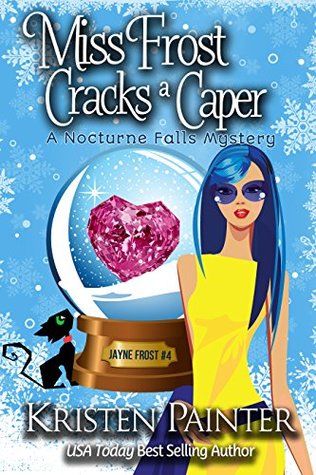 Welcome to Nocturne Falls, the town that celebrates Halloween 365 days a year.
Jayne Frost is a lot of things. Winter elf, Jack Frost's daughter, Santa Claus's niece, heir to the Winter Throne and now...private investigator. Sort of.
When Lark Bramble, an old frenemy, shows up in Nocturne Falls, Jayne finds herself reliving the painful past and trying to make responsible decisions that won’t mess up her future. But being an adult proves harder than she thought.
Finally at peace with where things stand between her and Lark, Jayne thinks everything’s cool until a chilling event at the Black and Orange Ball shatters that peace and puts Jayne at odds with the powers that be. She knows she’s on thin ice, but she’s determined to crack the caper.
Can Jayne find a way to right the wrongs she might have caused or will she forever bear the guilt of allowing herself to be snowed again?


So I enjoyed the mystery and the writing style, which is what I love about the Jayne Frost Series.
Nothing has changed in the fourth installment, when it comes to that. But the "low"rating is rather connected to the storyline, more specifically to the romance.

Let's first take a look on the things I like, then I can knit-pick through what I didn't
Like I already said, and keep saying. This is well written. Painter is a talented writer and I adore the world building of the series.
This is rather light on the fantasy aspects. But it's just right for the series.
Still Painter adds interesting new bits to each book and extends the world building a little more with each installment of the Nocturne Fall Universe. It's really masterfully done, light and yet intriguing.

The character building is done in a similar way. After reading so many books set in NF, I feel like, I know this little town and it's nice to always revisit.
Now, in this installment I had a bit of an issue with Greyson. I didn't feel his reaction at the end was in character... but then his character is shrouded in a bit of mystery, so maybe we will get so hear later why he reacted so strongly (it felt cowardly as well if you ask me)

Now the storyline, which is were all my issue lie. First it took about 50% until the mystery took off. And frankly most of the book until then was about Jayne's personal life. I found myself a bit disinterested in the book because of it and I kept thinking, when will the mystery start?
When it did, I was totally invested and had to keep reading. Because it was a good mystery. There are quite a few twists and turns, while I guessed some, I didn't really see one coming. The mystery left me satisfied. Which is the reason I rounded up to 3Stars on Goodreads. Because essentially I love this series for it's mysteries.
Which leads me to the romance aspect. I was not a fan in the third installment. And frankly it hasn't changed that much. Except I did like the outcome. However, I didn't like how Jayne got there. It was rather disappointing, because frankly I wanted her to make the choice, rather than being left with that choice. I do like that she has always been honest, but her not making choices does annoy me. There lies the root of my problem with the book. I hope, that now things seem a bit more resolved it will not only stay like this. But I hope she finally makes the choice and invests into the man. I am all for his team, by the way. Was right from the first moment he was featured in the series.