Review: The Difference Between Us by Rachel Higginson 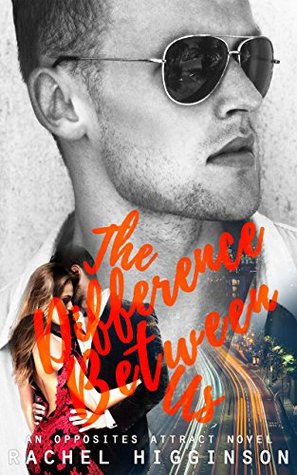 The Difference Between Us

At least when it comes to finding Mr. Right.

I'm tired of men that only want one night stands or blind dates that are nothing but awkward and uncomfortable. I'm tired of avoiding inappropriate text messages and the constant disappointment of always meeting Mr. Wrong.

After all these years of dates that lead nowhere, I can admit that it's me. I'm the problem. I'm shy and picky and cursed. Definitely cursed.

The first? I'm giving up dating and relationships and men in general. Maybe, possibly, forever.

The second? I'm going to have to try harder to avoid Ezra Baptiste.

If I couldn't hack it in the kiddy pool of dating, I certainly can't swim in his deep end. He's too successful. Too intense. He's all man when I'm used to nothing but boys pretending to be grownups. He's everything I'm afraid to want and so far out of my league we might as well be different species entirely.

So I like some parts of this, and others... well not so much

But lets cut to the core: my biggest issue, just like in the first installment, with this, is inconsistency.
And we talking in every aspect.

I like certain descriptions for example. They are beautiful and feel authentic. Others feel run of the mill, very cliche and unreal.
Some moments are poignant they feel real, go straight to the heart. And others... well they felt formulaic and extremely planned.

The character building is the same. There are things I adored about the characters. Others felt too shallow and also very inconsistent.
In both books, there is a kinda back and forth between the MCs. The men are clearly into this idea and are pursuing the gals. I quite enjoyed it, but at times I felt the women were a bit obtrusive. It did feel out of character.
Then there is the Molly in this book and the Molly in the previous book. I don't think the two pictures align. I got the impression that Molly was loyal, sassy and confident in book one. In this installment, however, she stresses how shy she is, all the time. I mean I got she was intimidated by Ezra. But... she didn't come across as shy.
Then there is Ezra. I loved Ezra in the first installment. And I like him in here, but- and there is a but, somehow I didn't get enough depth from him. I mean Higginson scratched at some of the surfaces. And that was awesome, but most of the time it was just not enough. We didn't get any insight into his relationship with his sister for example. We got more in book one, considering this is his book, I felt unsatisfied. I had questions about his father, his previous relationships - but basically got no answers. I mean they were hinted at, but that's that.
There were a few moments where one got a feel for what lurks behind Ezra's intensity and his drive. But not enough
This being written from Molly's POV one could kinda say I am nitpicking about Ezra. But I was left with a lot of questions. Hinting at stuff made Ezra feel a tad too planned and at the same time not thought through enough to make him tangible and real.
I had moments where I could relate to Molly. Others where I should have been able to relate, but simply couldn't.
Like I totally got her problems with Henry. I have never been in a situation like it, I got her. Her reluctance at first, her assumptions all of it felt real. Higginson did a really good job at that.
But then there are Molly's issues with cooking. I mean really?! I could so not relate. I honestly couldn't. It felt like Higginson just needed to add another element of them being opposites. But it made Molly look ditzy. Which is totally out of character. The entire scene felt wrong to me
Then there is Molly's are and her work. Her assessment of Graphic Design was rather annoying since I am in that field I strongly disagree with her. Also, Molly was complaining about it, but in the end, she didn't choose to become an artist. Again, it felt inconsistent.
Then there is the subject of being creative. I don't think Higginson and I see eye to eye on that. So I won't bore you with that bone I want to pick with her. But, while on some occasions, I could feel Molly's love and her losing herself in her art, most of the time it felt like how one should feel about art. Or at least how the run of the mill describes it.


There are zero surprises in here. But I was okay with it. It is what I expected in many ways. It's cute and fluffy set around chefs and all that.
But while Higginson does touch on some heavy subjects. And she does a really good job at it if you ask me. Every time it comes to its peak- it's kinda swept aside. Done. Solved. It felt like not enough.

I did enjoy it. But I also felt like there are plenty of inconsistencies, enough to make me think - here we go again, this was different a few pages ago...
Alas, I am going to read the next installment next. Because while I feel this needs some more work it also is actually not bad. In fact, I think it could be quite a great book if one would iron out those inconsistencies and add more depth to subjects that have already been touched.
So a generous 3 Stars it is.