Review: Accidentally in Love with the Pilot by Teri Anne Stanley 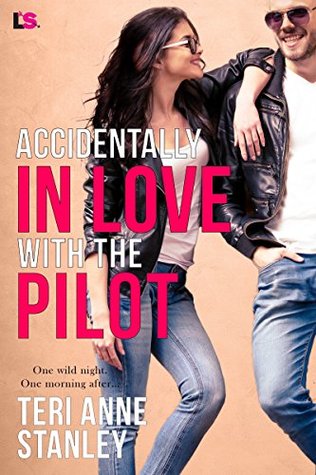 Accidentally in Love with the Pilot

Fighter pilot Ben Rutledge loves his solitude. Which means spending a month of leave in overcrowded, over-glitzy Las Vegas isn’t up his alley, especially after his friend ditches him. His first inclination is to bow out, and quickly. Instead, he finds himself sharing drinks—and a whole lot more—with a sexy woman celebrating her birthday. After all, it’s just one night, and he can go back to his quiet life tomorrow.

Megan Shuttlekrump doesn’t have time for a boyfriend, much less a husband. But a night of celebratory drinks with a handsome stranger ends with a ring on her finger—and no memory of how it got there. Her new “husband” is over the top hot, but he’ll be out of her life once his leave is over. As long as they can find out which of the thousand or so chapels in Vegas married them…

Accidentally in Love with the Pilot looks like a cute & fluffy, sounds like one as well.
And it does deliver exactly what the package says. Light-hearted cute & fluffy.
It's basically a what you see is what you get.

So on those bases, I got exactly what I was feeling for.

It is completely predictable. I mean completely and utterly. No surprises at all. Even the grand gesture. But I didn't care. Because it was sweet, funny fluff. It made me feel all sweet and fuzzy. Which is frankly why I read these kinds of books.
Though predictable, it's a fun storyline. For some reason, it reminded me of the old school romcom movies a la Doris Day, just with a dash of shmexy thrown it.
The only small thing I was a bit taken aback was the last announcement. I mean, I knew Stanley will throw that in, but I think the number was a bit, well over the top? Though it was for the last line clearly, which is funny. But I felt it drove home the kinda caricature aspects that surfaced during the book. I would have liked one less, in fact preferably two less.


The two MCs were both interesting. Both being introverts to some extent. Both being at times plagued by the same insecurities. I love Ben, even when he was a bit too perfect.
Their assumptions about each other, grated on me. They were both pretty presumptive and worse they never actually talked about it. EVER. I kept thinking, just talk to each other, problem solved. But noooo, we rather assume and be worried.
The supporting cast was quirky and funny. A bit over the top, to be honest, they very over the top. I mean even his family was eccentric, it felt a bit much. But I do like them.
Though Stanley does add a few issues the MCs struggle with, which made the MCs feel more real, it still is super lighthearted.
If you looking for deep character building. This ain't your book. If you feel like endearing characters who grapple with finding some love, then you at the right place.

So basically, it's nothing hugely suprising, nothing heavy.
As I said, what I see is what you get.
In fact, I am sure it isnt very memorable.
The writing style is not amazing, but it's not terrible either. Dialogues are fun and witty but not ingeniousnius or inventive.  The characters are quirky but have not much depth to them. The story line is sweet but predictable...
Honestly this probably should be 2.5 Stars, however, I did feel like exactly this kind of book so I am rounding it up. *shrugs* I know totally subjective, but I couldn't care less. I am feeling all pink and fuzzy atm. (thanks to reading this)

Accidentally in Love with the Pilot is a perfect lazy afternoon read.
It's lighthearted, sweet and leaves you smiling.
Cute & fluffy happiness which will leave you pink and fuzzy.