Review: To the Edge by Cindy Gerard 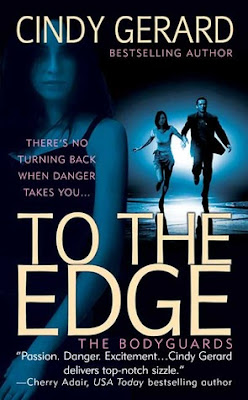 To the Edge by Cindy Gerard

The daughter of a wealthy businessman, Jillian Kincaid grew up with bodyguards shadowing her every move-and she hated it. Now a TV anchorwoman, she refuses to let another hired thug follow her around. Not even when she begins to receive terrifying death threats. Not even when the bodyguard is the darkly seductive Nolan Garrett...

Trained in Special Ops, bodyguard Nolan Garrett has been hired by Jillian's father to keep her out of danger. But it's clear from the start that Jillian isn't going to make his job easy. Far from the spoiled princess he expected, Jillian is tough, independent, and totally sexy. And she's fighting him every step of the way.

As Jillian's stalker raises the stakes, Nolan must keep her close if he wants to keep her alive. But being so close can only turn up the heat that's been simmering between them-a heat that could explode into passion at any moment...

I had this series on my TR list for at least 2 years. Bodyguards stories are not my cup of tea so I kept pushing it for later.

The only reason I put it there to begin with is because I heard that the heroes of the firsts books of the Black Ops series make an appearance in this series (What can I say, I’m OCD like that :/) otherwise I would just have given it a miss.

I'm glad I haven’t because I really enjoyed it.

There was nothing new with the stalker plot but:

1/ both Nolan and Jillian were awesome main characters,
2/ I really liked how their relationship evolved,
3/ the chemistry between them was smoking hot,
4/ great casting of secondary characters,
5/ the culprit was a total surprise,
6/ I totally LOVED the end