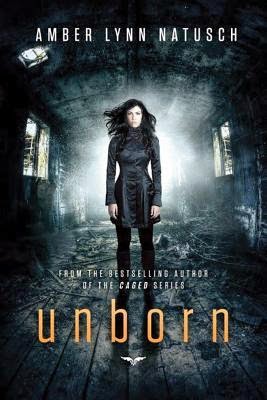 Born into mystery. Shackled to darkness…

Khara has spent centuries discovering everything about the Underworld―except her place in it. But when she’s ripped from her home, solving the riddle of her origins becomes more important than ever. With evil stalking her through the dark alleys of Detroit, she finds salvation from an unlikely source: a group of immortal warriors sworn to protect the city. Khara needs their help to unravel the tangled secrets of who and what she is—secrets many seem willing to kill for. But time is running out, and the closer she gets to the truth, the closer necessity binds her to an arrogant fallen angel.

Can their shaky alliance withstand that which threatens her, or will her soul fall victim to the unholy forces that hunt her―those that seek the Unborn?

Ok.
If I would have written a review a third in, this would have gotten 1Star and it would have been a total rant.
After finishing it-and I was not so sure I would at that time-I am between 1,5 and 2Stars.
The reason I even finished this was; the beginning wasn't that bad and though I really don't fancy angel books I was kinda curious where Natusch was taking this. I mean the whole world building rather than the romance. That was o so freakn crystal clear the moment Oz entered the scene. I mean can you say obvious? Exactly. I rest my case.
I was so annoyed though, I felt I needed a break, but then at lunch time, I couldn't make up my mind what to read next... and decided to just get it done and over with. Since this was an ARC, I felt more obliged to finish anyway. And I am glad. Because it did get better.

Not the world building, mind you. That is basically non-existent. I mean I had greek history and mythology, though I tend to forget who is who in the greek pantheon, thanks to my great name memory, I do know the basics pretty well. So Hades, Persephone, Demeter, Ares.. I know who they are. But throwing greek mythology around doesn't make world building. Then there is the PC, they a fun idea, based again in greek mythology since Ares did have a load of offspring. The only completely new thing- OK maybe not THAT new- are the Stealers. Everything else is an array of Supernaturals everyone knows, nothing much was added to them. No the story just mentions them and it is assumed the readers is in the know.
I am not even gonna go into the whole Angel and Greek pantheon thing at the same time not making sense thing...It can be done. Kevin Hearn has mixed all kinds of religions and supernaturals. Though no angels mind you. Still I firmly believe it can be done. But it wasn't done here, it was just thrown at you.
There is no mention of time, it's set in Detroit, I am am guessing in the near future. Do not ask me why. Just because I actually wouldn't know. No explanation was made, nor is it ever mentioned. There are lots of things eluded to like battles that had happened, that the city is in decay... but one is never actually given any concrete knowledge of it.
So saying it is non-existent is actually being pretty nice.

The character building, again, is not really done. There are characters that pop up. One gets an idea of who they are. But they are all one dimensional. In fact around 60% in, the action picked up and I thought maybe this is going to get better. And as I said it did. But it was only the plot that improved. Not the characters. There was absolutely no character growth, development or anything else. I couldn't get myself to care for any of them. Not a single one. The villains are so typical they felt like cardboard cut outs. And the love interested.... well. He is apparently hot and enigma and mysterious. I know at least that's what Natusch was going for. I wouldn't know. He felt wooden and predictable, having two emotions shoved into my face, doesn't really endear a character to me.

The writing style. Let me put this kindly: NOT for me.
The reasons: it felt all over the place.
Inconsistent at best, like someone was trying way to hard, repetitive, and repeatedly crinch-inducing at worst.


The story line the only thing I found interesting about this was the whole back ground of Khara and the action that ensued. I like battle and fight scenes. Not that these were the best or even fabulous ones... nope but they were entertaining. So once the pace picked up, I was really hopeful that the second half will trump the first and make this a way better book. But well, it didn't manage simply because it wasn't enough to outweigh the clumsy execution of this novel.
Then we got the romance. Insta L... obviously... and predictable. But add to this insta- sibling/family- love made this over the top.
So Khara is not only the most desirable being ever, she is also totally trustworthy and instantly becomes important to every other character in the book. EVERY SINGLE ONE.
So yeah, no just no.

I am actually kinda sad, because I would like the outline of this. I loved the blurb. The cover looks good. But the execution- shabby is a nice word.
Will I read the next instalment? Doubtful..... Buuuut never say never.


This is your normal text here but the text inside these tags is a spoiler!. And then you can keep writing over here.
Email ThisBlogThis!Share to TwitterShare to FacebookShare to Pinterest
Labels: 1.5 Stars, ARC, Deniz, PNR, Review