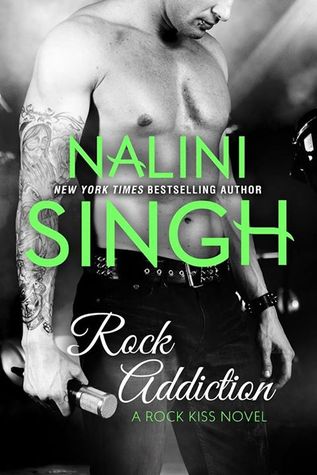 Summary:
A bad boy wrapped in a sexy, muscled, grown-up package might be worth a little risk…

Molly Webster has always followed the rules. After an ugly scandal tore apart her childhood and made her the focus of the media’s harsh spotlight, she vowed to live an ordinary life. No fame. No impropriety. No pain. Then she meets Zachary Fox, a tattooed bad boy rocker with a voice like whiskey and sin, and a touch that could become an addiction.

A one-night stand with the hottest rock star on the planet, that’s all it was meant to be…

Fox promises scorching heat and dangerous pleasure, coaxing Molly to extend their one-night stand into a one-month fling. After that, he’ll be gone forever, his life never again intersecting with her own. Sex and sin and sensual indulgence, all with an expiration date. No ties, no regrets. Too late, Molly realizes it isn’t only her body that’s become addicted to Fox, but her heart…

Nalini Singh is one of my favorite authors as well as one of the best paranormal romance writer ever. She's one of the three authors whose books are automatic buy for me. She really has the knack to not only build great characters and relationships, create amazing worlds building but also and most importantly unlike many authors writing PNR, her series are coherent, originals, not dragged for the sake of it or suddenly overflowing with dubious new characters brought in for the purpose of helping dragging said series.

Years ago, a buddy reader bugged me to try her Psy-Changeling series. She was raving endlessly about it but at that time, the series already had nine books released so I was a bit hesitant and weary to start it (that's the effect long series usually have on me). Moreover, and even though I do enjoy science fiction stories, I wasn't sure I would like the futuristic and Psy parts of the series. But I checked her work and decided to begin with her contemporary romances and if I liked them I'll give a go to the Psy-Changelings. Not only did I really enjoyed the stories but the way she described her heroes and the relationship building was what made me start the amazing P-C series.

With Rock Addiction, I thought that I'll have the same pleasure as when I was reading her Silhouette Desire stories, but to be honest I have to say that I was a bit disappointed.

Even though the writing isn't as polished as in her other books, the story started really hot but very quickly the sex elements took over the story. I understand that it was all new, hot and shinny for them, and a part of me even found all the smexing realistic with regards to a new hot relationship starting, but reading the book it seemed to me that each time Molly and Fox met they were going at it and that was too much for me.

Also, the secondary characters (Molly's sister, Charlotte and
her mysterious and really hot boss, Fox's band members) hold the promise of great stories to come and instead of having Molly and Fox in the sack for the xth time I wanted to know more about them. It reached a point that at times I was more interested in Charlie and T-Rex relationship as well as Thea and David on going memos... So yes, I'm curious to read the next installment.

Last but not least, last May, Nalini Singh was in Belgium and not only I had the immense pleasure to meet her but she agreed to respond to a short interview. I, along with Deniz (my partner in crime) would love to thank her for taking the time to answer our questions.

The interview will be posted on the Kiss & Tell rubric on September 5th.