Forever, an all new Friends story from Monica Murphy, is available now!! 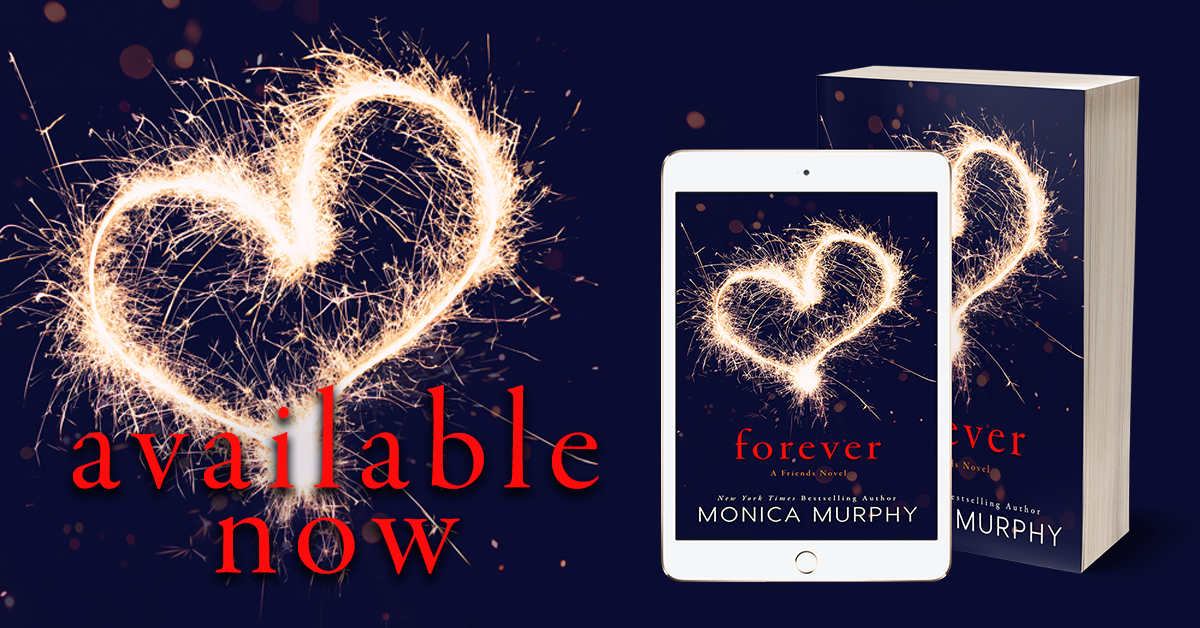 She’s all I could ever want…

I have a reputation around school. Cold. Untouchable. Unfeeling. Only one girl could ever make me want to change and that’s Amanda Winters. Too bad I broke her heart and drove her away.

So to get through the rest of my days in high school, I tell myself I need to focus on more important things. Like taking our football team to championships. Get accepted to the college of my choice. And finish my senior year without wanting to run away from my problems.

But your problems chase after you no matter where you go. And it’s a lot harder when you fight them alone. The longer I go without Amanda, the more I miss her. Her smile. Her laughter. The things she said. How she looked at me like I was the only person who mattered. The way she made me feel…

Why can’t I have everything, including the girl? I’m determined to make things right. And make Amanda mine…

Monica Murphy is the New York Times, USA Today and #1 international bestselling author of the One Week Girlfriend series, the Billionaire Bachelors and The Rules series. Her books have been translated in almost a dozen languages and has sold over one million copies worldwide. She is both self-published and published by Random House/Bantam and Harper Collins/Avon. She writes new adult, young adult and contemporary romance.

She is a wife and a mother of three who lives in central California on fourteen acres in the middle of nowhere along with their one dog and too many cats. A self-confessed workaholic, when she's not writing, she's reading or hanging out with her husband and kids. She's a firm believer in happy endings, though she will admit to putting her characters through angst-filled moments before they finally get that hard won HEA.

Forever is filled with teenage angst and drama just like the previous two.
This installment is mostly about Amanda and Tuttle. In fact it picks up right where the last book ended.
To be honest I expected that there would be another book in the series... I don't know why but I kinda did. After finishing, I checked to see when it would be, to discover that this was the final book in the series. Which is kinda sad, because I don't feel we got enough of Em. Nor I find Livvy's ending satisfying. So I kinda hope there will be a book featuring Em and Cannon...

I thoroughly enjoyed all the dramas and all the angst until the last big drama. It just felt like one too many times and frankly I felt like it was the perfunctory romance thing to do at 80% of the book, rather than what was actually needed in the storyline. I think since there won't be another book, Murphy should have instead put more Em and Cannon moments in. Cannon is beyond awesome in this book. We get to see Ems vulnerable side and her friendship with Amanda does redeem her in my eyes. Ryan and Livvy are as annoying as ever. And somehow we never got enough about Dustin in this book, if you ask me. But maybe I am wrong and we will still get another book one where we actually see what happens to Dustin and we get to more details on Em and Canon?

I did devour this book just like the previous. This is well written, it captivating. I just could have done without the last drama. And while I feel that Amanda's and Tuttle's story is satisfyingly wrapped up. I would like some more closure with Em and Livvy's stories. Basically I would like another book. Which no doubt I would devour just as fast as I have all the books in the series.
This is an angst and drama filled series, with characters that I wanted to slap at times and yet I did end up caring for them.
This is due to Murphy's impeccable timing and writing of emotions. Big drama with lots of bite but also heart. The character building is done so well, I feel like I know each of the cast- and we talk a rather big on. While at first one thinks they might be a bit cliche, they are actually all quite unique. Sure we have cocky jocks and arrogant cheerleaders in the throw, but as the story goes on, even they get a different layer added. The two ex-besties who I totally despised, were totally redeemed through Amanda. Though I am still not sure what drove them to act the way they both acted.

A series that was thoroughly entertaining and captivating!
Can't wait to see what Murphy is writing next! 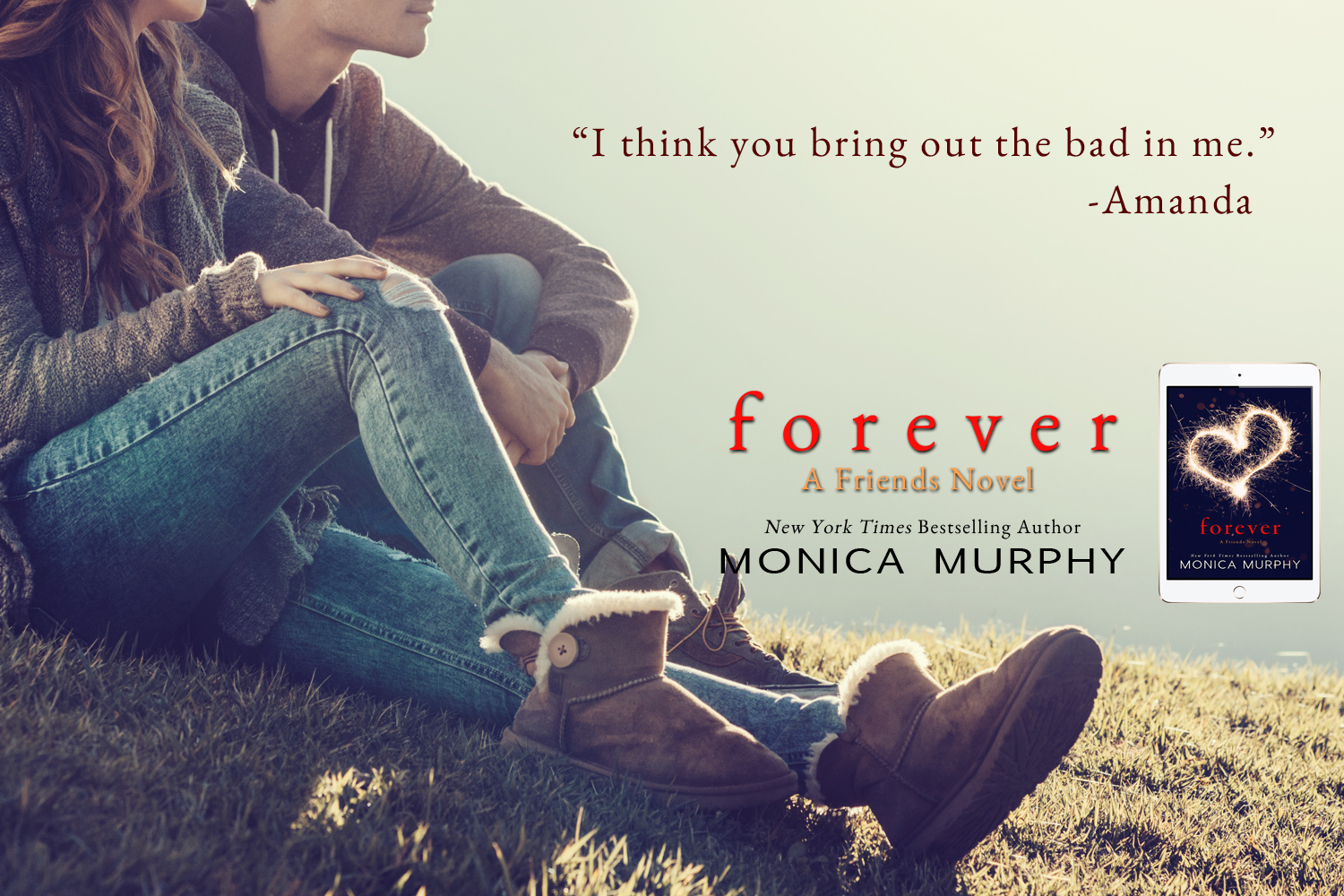 I’m walking through the senior parking lot when I spot Jordan standing near his black Range Rover, leaning against its side. He’s wearing a white Henley shirt, his arms crossed and his biceps bulging beneath the long sleeves. The breeze ruffles his dark hair across his forehead and he stares off into the distance, every inch the troubled, broody boy that he is.

He looks so freaking good, I’m momentarily distracted by him. I stop and stare, my lips parted, my breath becoming shallow. It’s still hard for me to believe that this guy, this gorgeous, sweet, annoying, smart, strong, wonderful, awful boy likes me. That he might even care about me.

“Hey.” His deep baritone knocks me from my daze, and I head over, stopping just in front of him. “Where’s Livvy?”

“She made last minute plans. With someone else.” I don’t say anything else. Livvy’s secret isn’t mine to tell, and I’m afraid if I start talking about it, I’ll get really pissed. So I leave it alone. “Guess I don’t need to drive your car after all, but thank you for offering. I sense it was huge deal.”

“It is,” he agrees, tipping his head toward me. “But you’re worth it.”

Oh. He says things like that and I’m left speechless.

“You don’t have any plans?”

“No.” I shake my head, feeling tongue-tied.

Jordan grabs my hand, lacing our fingers and giving them a squeeze. “Then let’s go to lunch together.”

“Don’t you want to stay here?” He usually does. He’s always out at the quad, holding court over his loyal subjects. I used to sit out there with him, with all of them, just basking in his presence. But once we had the so-called breakup of our so-called relationship, I stopped going. One, because I couldn’t stand to be near him knowing he wasn’t mine anymore. Besides, most everyone who would hang out with Tuttle is annoying. Frustrating. Awful.

All of the above.

“No, not if I can sneak off campus somewhere with you.” He tugs me closer, his expression serious, his voice low. “Let me treat you to lunch, Amanda.”

“Okay,” I say softly, a jolt pulsing through me when he runs his thumb over the top of my hand. Sometimes the simplest touch has the most devastating effect.
Email ThisBlogThis!Share to TwitterShare to FacebookShare to Pinterest