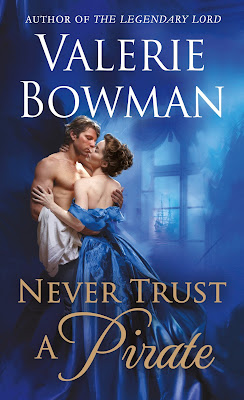 The rules of engagement were never so scandalous. . .

A rumored pirate and the scurrilous black sheep of his well-to- do family, Cade Cavendish relishes his world of rebellion, deception, and seduction. Nothing and no one can hold him to be the duty-bound, honorable man he is expected to be. But when an unexpected run-in at his twin brother’s estate with a ravishing, raven-haired maid leads her to believe he’s actually a viscount, Cade’s renegade life is thrown wildly off-kilter. And even though a case of mistaken identity can be quickly set to rights, matters of the heart are quite different…

Miss Danielle LaCrosse is startled to learn that the handsome gentleman who radiates sin and has the devil in his eyes is not her employer the Viscount, but rather his infamous brother. A former heiress, orphaned and left penniless, Danielle has more than a few secrets of her own. Cade may be skilled at coaxing even the most hidden desires out of Danielle but can he earn her trust—and win her heart—as they embark on an adventure to confront a dangerous enemy from both of their pasts . . . and uncover the identity of the so-called Black Fox along the way?

Never Trust a Pirate is part of the Regency-set Playful Brides series by Valerie Bowman.

Valerie Bowman grew up in Illinois with six sisters (she’s number seven) and a huge supply of historical romance novels. After a cold and snowy stint earning a degree in English with a minor in history at Smith College, she moved to Florida the first chance she got. Valerie now lives in Jacksonville with her family including her mini-schnauzer, Huckleberry. When she’s not writing, she keeps busy reading, traveling, or vacillating between watching crazy reality TV and PBS. She is the author of the Secret Brides series, starting with Secrets of a Wedding Night, Secrets of a Runaway Bride, and Secrets of a Scandalous Marriage.

I took a good while to get into this book. In the beginning it felt like a classic pirate romp movie. The characters all felt a bit cliche... and I was quite sure I was in for a tab bit of a disappointment.
This is the first book I read by Bowman. So I wasn't sure what to expect. The only thing that did keep me going in the beginning was the writing style and very soon the witty dialogues as well.
So about a quarter in I had resigned myself to a well written book with great banter but sadly characters that were to stylistic for me. Still a good book mind you....
THEN...
...slowly there were layers added to all the characters and as the story went on, I got to see different sides to them and somehow I found myself endeared to them. In fact I adore the entire cast. Well most of them anyway. Bowman did an excellent job building the MCs characters and most of the support cast. While at first sight it seems the usual usual, she added details, surprising tidbits that made them feel more real and unique. There is depths to most of the support cast as well. The only character that did come out flat in my opinion was the villain. Though that is probably connected to the story line.
By the way will there be a book about Grim?

The story line went from pirate romp to cute historical romance and back to privateering.
I loved the sections that were set in London. But the privateering bits? Not so much, which is funny, because I probably would have told you the opposite before if asked before hand. The thing is that the adventure bits of the book felt a bit rushed. There was this careful buildup in London, slow emotional connections and great character building, then it changed to lots of smut, the big show down.. and the happy ending. I felt a bit let down by the show down to be honest. It felt a bit anticlimactic.

Never Trust A Pirate is the seventh book in the series. As I mentioned I have never read a book by Bowman before this. It does work as a standalone. I might have take a bit longer to get into because of that however, I'm not sure, just saying it could be. What I am sure of however I will read the next book in the series and I will read the previous books as well. Definitely a series I could get into.

Note: Since reading and reviewing this, I have read another one of the books. Two things are clear, a will read all of the books in this series and I would advise anyone who hasn't read the series to start with book 1.. not book 7 like I did. I was right with my previous assessment quite a lot fell into place reading the previous book. Besides that, you going to end up reading them all any way ;)


A well written historical romance, with some action and lots of fabulous banter. Definitely advisable for lovers of the genre.


He’d done it. He’d escaped from a French ship with the map detailing the planned route to rescue Napoleon from St. Helena. Of course he had. He was the Black Fox.