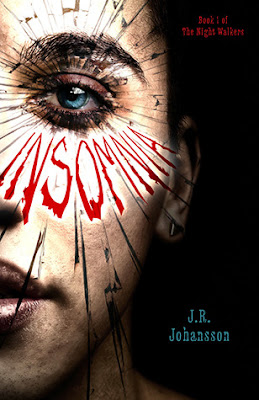 Publisher: Flux
Series: The Night Walkers #1
Pages: 360 Pages (Paperback)
Genre: Paranormal, YA
Release Date: June 8, 2013
Summary:
It’s been four years since I slept, and I suspect it is killing me.

Instead of sleeping, Parker Chipp enters the dream of the last person he’s had eye contact with. He spends his nights crushed by other people’s fear and pain, by their disturbing secrets—and Parker can never have dreams of his own. The severe exhaustion is crippling him. If nothing changes, Parker could soon be facing psychosis and even death.

Then he meets Mia. Her dreams, calm and beautifully uncomplicated, allow him blissful rest that is utterly addictive. Parker starts going to bizarre lengths to catch Mia’s eye every day. Everyone at school thinks he’s gone over the edge, even his best friend. And when Mia is threatened by a true stalker, everyone thinks it’s Parker.

Suffering blackouts, Parker begins to wonder if he is turning into someone dangerous. What if the monster stalking Mia is him after all?

Oh this book was so so close to 5 stars for me. It's in so many parts so brilliant. But somehow I felt a bit let down by the solutions at the end. And when I started thinking about this, somehow several issues kept creeping up... hence I rounded it down. Still a really great book.

The idea behind it all? Absolutely brilliant! I might be a wee bit biased though, because I have problems sleeping. Which is actually one of the reasons the book drew my interest. In on of my insomnia spouts I saw the title on Netgalley. And HAD to find out what this was about. The blurb sounded interesting and the book actually exceed my expectation. At least most of it did.

The plot is really well paced. I found myself thinking that several times while I was reading it actually. Johansson really got that right. She dwelled where it was necessary and moved on when not much was happening. Besides the entire dream-walker idea there was the stalker mystery going on. And while I had the villain pinned right from the beginning, I did get thrown off my tracks and started wondering if Parker might not be guilty. But the whole mystery unraveled at the end and though I wasn't surprised, it felt a bit too generic.
I mean this book is one level really different. But when it comes down to plot... well not so much.

The entire book is told from Parker's POV. Naturally we get to know him rather well. I really liked Parker and his internal dilemmas. Though when he decided to be the good guy- or rather to give up -I felt like slapping him. I could really relate to him, his fears and his insecurities are so well written and were is easy to relate. His sleep deprivation so well described, I started wondering if Johansson is a fellow insomniac.
The other characters is mostly really interesting actually especially his two best friends Abbie and Finn. Finn is totally my dream guy bestie. He is quirky, loyal and good fun. Parker's and Finn's little banters made my smirk every time.
Abbie was amazingly written, because she kinda changed and evolved as Parker's relationship changed with her. I think in fact she is one of the best written characters in the book. Not so much because she is really a great character, which she is, but because one gets to know different bits and pieces of her as the story get along. And at the end I felt where she was coming from and understood her feelings and actions, kinda like she is an old friend
Mia was at times annoying, but again Johansson has carefully constructed this character and basically even at the end one know very little about Mia- but it doesn't matter really, since Parker doesn't know her well. The glimpses we were given were really well planned, to give you an impression and makes you wonder and want more until the end. In the end I felt that for the first time I kinda saw Mia without distortion. I am though looking forward to seeing what Johansson will do with her in the next book
The support characters though, were a bit meek. I really found the villains to cardboard like. In fact I wasn't really disturbed by them, they were just written in that way to many times.
I found the last scene in the school a bit too over the top. The big showdown was a let down for me. And the villain was the main point. I think the whole thing was too Hollywood for me. And all the characters kinda stepped into that mode. You suddenly had the damsel-in-distress, Bestie in trouble, evil psychopathic villain and tada! the great hero that saves the day.

The world building was brilliant! I think definitely may favorite part of the book. The dreams were amazingly described. It felt surreal and like an intrusion into someone's mind. I honestly can't think of another book that used that kind of an idea. I loved that it had consequences to Parker, because that made it believable. But I was left with sooo many questions about the whole watcher thing, I sure do hope that some of the will be answered. Saying that I like that Johansson didn't answer all or even allot- but rather one got to get to know the bits and pieces Parker worked out as he did.

Johansson's writing style is intriguing and fresh. I think this is someone who knows her craft. She planned each detail extremely well and just gives you enough to keep you wanting more. Her prose is descriptive and captivating. Definitely an author I shall be watching out for in the future


Despite the fact that Insomnia with a kinda wrap up, I am desperate to read the next one. There are questions I need answered! And I can't wait to see where Johansson is taking this.

A brilliant set up and world building, mostly great characters and despite the not so to my taste big show-down and a few too cliche bits and pieces a great debut novel.