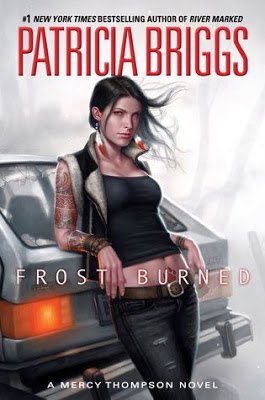 Mercy Thompson’s life has undergone a seismic change. Becoming the mate of Adam Hauptman—the charismatic Alpha of the local werewolf pack—has made her a stepmother to his daughter Jesse, a relationship that brings moments of blissful normalcy to Mercy’s life. But on the edges of humanity, what passes for a minor mishap on an ordinary day can turn into so much more…

After an accident in bumper-to-bumper traffic, Mercy and Jesse can’t reach Adam—or anyone else in the pack for that matter. They’ve all been abducted.

Through their mating bond, all Mercy knows is that Adam is angry and in pain. With the werewolves fighting a political battle to gain acceptance from the public, Mercy fears Adam’s disappearance may be related—and that he and the pack are in serious danger. Outclassed and on her own, Mercy may be forced to seek assistance from any ally she can get, no matter how unlikely

Unlike many other sequels that have disappointed me over the last year or so, this book didn’t. The only reason I didn’t give it 5 stars is because of the lose ends Patricia Briggs left in the plot. That being said, if you are a fan of the series you shouldn’t be disappointed by it. I also would like to say that I am happy I haven’t read the spoilerish blurb before I picked up the book, it would just have spoiled the first chapters. :/

I was going to fight vampires, and my name wasn't Buffy - I was so screwed.

For those who doesn’t know the series, Mercedes “Mercy” Thompson is a coyote shapeshifter. She was raised in the pack of Bran, the alpha of all the werewolves in the world and she is presently mated to Adam Hauptman, the alpha of the Columbia Basin Pack.

There are big bad wolves all over the world who tremble at the sound of his name, yet a little puny coyote girl peanut-buttered the seat of Bran Cornick’s car because he told her that she should wear a dress to perform for the pack.

A thing I love in this series, and this book didn’t disappoint, is that even though trouble seems to love her, Mercy isn’t a reckless heroine nor a damsel in distress. Also, she may be mated to a powerful werewolf alpha but she stands on her own.

It was like triage. Decision one - preserve those who were safe. Decision two - retrieve the rest. Decision three - make the ones who took them regret it.

Another thing I love in this series is Adam-Mercy relationship. There is little smut in this series/book but they relationship is hot. I love how they argue and banter. And icing on the cake, for the first time in the series, in this book we have 2 chapters with Adam POV.

"Do they always flirt with biblical quotes?" Asil asked Tad.
In long-suffering tones, Tad said, "They can flirt with the periodic table or a restaurant menu. We've learned to live with it. Get a room you guys."

The book is action packed from the very beginning. However, halfway through part of the plot was solved but what was left of it was a bit fuzzy. (view spoiler on GR) That being said, I really appreciated that Patricia Briggs didn’t compromise on what Adam had to do.

Besides the action, this book has emotional as well as funny moments. I missed Bran but beside the participation of Zee, Tad and Stefan, I liked the introduction of Asil, the witty dialogs and Marsilia’s AMG episodes were hilarious.

All that is required for evil to prevail is for good men to do nothing.