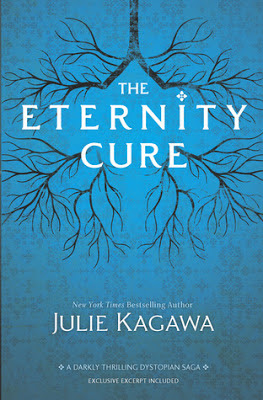 Allison Sekemoto has vowed to rescue her creator, Kanin, who is being held hostage and tortured by the psychotic vampire Sarren. The call of blood leads her back to the beginning—New Covington and the Fringe, and a vampire prince who wants her dead yet may become her wary ally.

Even as Allie faces shocking revelations and heartbreak like she’s never known, a new strain of the Red Lung virus that decimated humanity is rising to threaten human and vampire alike

“You will always be a monster - there is no turning back from it. But what kind of monster you become is entirely up to you.”

Let me just put it it out there, I am not sure which book I  liked better Immortal Rules or Eternity Cure. But honestly it might be Immortal Rules. Though it doesn't matter much. Since I think this is Kagawa's best series so far.
So while I decided that I preferred the first book, it took me a while to work out why it was. At first I thought it might just be the cursed second book syndrome, that the diving into the Blood of Eden world the first time around was more exciting since it was all new. But while the world building is much more elaborate in the first book, there is actually more action in the second. And I like kick-ass action, so that was definitely not it. Finally I came to the conclusion that it's about Alison actually. Her internal struggles to be exact. While I get why Kagawa did write it the way she did, personally it didn't have as much pull for me as the first time around. Saying that, I also should mention, that I think it's important for Alison's character development. In fact it's a minor thing.

Mostly Alison is still a great female kick-ass lead. Her inner struggles are beautifully set against villains and nemesis and makes you ponder over the monster thing.
The last time I said that Zeke was to goody goody for my taste. Well, he is back and he is the most improved character in my opinion. He is much more real and not half as saintly. But still fiercely loyal, protective, brave and determined to do what needs to be done. He is much more disillusioned ,way more angry and he wants revenge for the ones who were wronged. Which in my opinion was a huge improvement on his character. I got him where he came from, I could relate to him, hell I even thought he was kinda hot!
My favorite character though is Jackal. I am so team Jackal!!  I love his unpredictability and his unapologetic bad-assness and my favorite was his commentary and wit. It was a huge source of entertainment. But while he was seemingly just cold and selfish, there a glimpses of him there, that show that there is more to him than that.

" I have good news and bad news The good news is that the jeep is still where we left it, and I got the damned thing working again."
"What's the bad news?"
"Something took my fuzzy dice.”

I sheathed my blade and glared at him. "And here I almost thought you weren't a complete bastard.""Well, that's your mistake, not mine.”

"So." His gold eyes shone as he gazed into mine. "I think I'm entitled to a smart comment or two now, don't you think?"... "Yeah", I muttered as his smug look faded into something that wasn't completely obnoxious "thanks" "No problem little sister" the leer returned,... "Comment number 1-how much do you weigh to snap the bridge like that? I thought you Asian were supposed to be petite and dainty."

"Oh well. That's humans for you, always so disgustingly mortal"


Kagawa has actually done a wonderful job with the character building in general. She produced a creepy and scary villain in Sarren and a mentor and philosophical voice in Kanin in Immortal Rule already, in Eternity Cure she established them just like she did with every reoccurring character in this book. As the story line unfolded one fight and one chase after another, more of the past was revealed as well and more about all those characters became clear.

The world building, while naturally not as exciting as Immortal rules, is superb again! Her take on the vampires being that of monsters - thank goodness no cute, intensely staring sparkling anything around here!!-  and the devastating state of the world is interesting and deliciously goth. In this book we get more of a glimpse of the vampire cities and society.

The writing style is unmistakably Kagawa. I love that it's recognizable as hers and still with that is different than the Iron Fey series. Having read everything she published so far, kinda makes it superfluous to say that I like her prose and expect quite a bit from it.  Eternity Cure does not disappoint, in fact I think it exceeded my expectation on this point. It's wonderful to see Kagawa improve with each book she writes.

The plot is fast paced and with several unexpected twists with a devastating epilogue thrown in at the end, that leaves you wanting for more. I honestly can not wait to see what Kagawa comes up next with.

I think this is somewhat Kagawa's most philosophical book. The question of who the monsters are is still highlighted by different character of different races. What makes you the monster and who has more humanity? And Kain acts often as the voice for Alison's search for answers to her internal struggles:“There are no good choices, Allison," Kanin offered in a quiet voice. "There are only those you can live with, and those you can work to change."
I really like that Kagawa not only created a interesting and beautifully dark story but that I am left with things to think about connected to myself and real life, which is what seriously good fantasy does in my opinion.


My biggest issue though? No, its not the end, despite it's being a cliffy... no no I could live with that.
It's this:

(taken from twitter:)
So, how long will we have to wait to find out what happens next with Blood of Eden series?

Julie Kagawa: Probably not for another year. Iron Traitor comes out in the fall, then Blood 3 in the spring

WHAT?!! REALLY? I have to wait ANOTHER YEAR to get another dose of Blood of Eden?!!