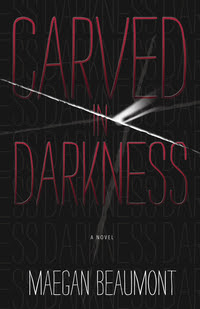 Carved in Darkness by Maegan Beaumont

Past horrors bleed into a present day nightmare

Fifteen years ago, a psychotic killer abducted seventeen year old Melissa Walker. For 83 days she was raped and tortured before being left for dead in a deserted church yard... But she was still alive.

Melissa begins a new life as homicide inspector, Sabrina Vaughn. With a new face and a new name, it's her job to hunt down murderers and it's a job she does very well.

When Michael O'Shea, a childhood acquaintance with a suspicious past, suddenly finds her, he brings to life the nightmare Sabrina has long since buried.

Believing that his sister was recently murdered by the same monster who attacked Sabrina, Michael is dead set on getting his revenge--using Sabrina as bait.

I don't read a lot of mystery/thrillers. Mainly because I usually figure it all out before the end of the 2nd chapter and end up bored with the story. Although I did figure this one out it took a bit longer and had a lot of interesting twists and turns that had me second guessing myself a few times. I enjoyed the search and the journey to find this despicable mad man. That part of the story I enjoyed very much.

Had the character betrayals been as promising as the twist and turns this would have been a hands down 5 stars! Unfortunately that wasn't the case. In my opinion Ms. Beaumont needed to delve a bit deeper into the characters to make me feel something for them. I had no insight to Melissa/Sabrina other than the horrible tragedy she suffered and the fact that now she is a feeling-less cop. The same goes for Micheal. I get he was suppose to be a cold heartless killer but these two main characters just felt flat for me. Not to mention that the Sabrina hasn't let herself feel anything in 15 years now she suddenly (with out any explanation or growth between the two) she is in love with Micheal within a weeks time. That just annoyed me.

There are a few things that also bothered me with the set up of Melissa/Sabrina's character. I know the attack happened when she was a minor and the files sealed and what not. This woman who is now a Homicide investigator would have had to have had a physical exam and a psych test done before ever even becoming a cop to begin with. Which brings me to my problem. She has screws and plates in her face which would have had to be explained to a doctor and proof of said injuries would have been investigated. Not to mention the scar carved into her stomach reading MINE. Not only would a doctor be seeing some red flags so would a psychiatrist. So how does nobody know what happened to her. A police department doesn't just say "Oh you changed your name. That's alright, no big deal." They are going to look into it. Again someone would know and it would be in her file.

Believe it or not I still enjoyed the book and would recommend it to someone who is easily able to overlook the flaws and still see the basic structure of a good story.