Review: This Is Who I Am by Cherise Sinclair 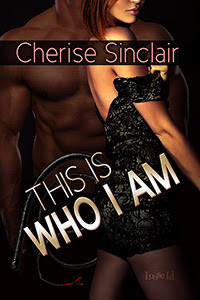 This is Who I am  by Cherise Sinclair

Now the horrible time is past, Linda just wants to return to her small conservative town, pick up her quiet life, and be normal. But how can someone who likes pain be ‘normal’? To her dismay, when someone spray-paints her home with obscenities, Sam shows up to rescue her. Again. Doesn’t he understand that the last thing she needs in her life is a sadist? He’s amused by her objections. But his dry sense of humor can’t disguise that he’s tough as nails and dominant and stubborn. He’s not going to let her drive him off this time. Soon she realizes she wants him to stay.

When he takes her to the Shadowlands, she feels as if she’s found a home…until she hears a voice from out of her nightmares.

He gave her a contemplative stare as if he’d never had a woman tease him. Then again, who in their right mind would tease a sadist?

That being said, even though I knew that Sam and Linda fell in that category I couldn’t wait to read “This is Who I Am”. For three reasons. The first one is although Sam is a sadist, since book 5 I couldn’t help but like him. The second reason is because in book 6, wanting to help Linda, Sam ended up messing up big time. He knows something went wrong but doesn’t know what and feel bad about it. The last reason is because in this book the identity of the mole in the Shadowlands Club was to be revealed (this particular sadist was creepy).

And then he’d made a mistake; to this day, he wasn’t sure exactly what. He had ideas, but hell, he could be totally off base.

“I’m not sure what I did.” Where were all the arguments he’d come up with over the past months? “But I did something wrong. I’m sorry, girl.”

Still, because of the MC's preferences I was prepared to not enjoy this book as much as the other, so this book was a really really good surprise. I don’t know how she did it but somehow Cherise Sinclair managed to write the story in such a way that their relationship was just beautiful and right.

With Sam, she’d felt safe. Safe enough to let go, to let pain transform into pleasure, to let herself slide into her happy place. His strength, his voice, even his brutal honesty was reassuring. So was the way he’d hold her afterward with surprisingly tender hands, caring for her as if she... meant... something.

Another thing that helped is that not only none of them is in the humiliation stuff but after her abduction Linda is determined to be threated with respect and Sam is there to help her recover her self-esteem and confidence. I really liked the game they played where she was to receive “good” punishment if she misbehaved and “bad” ones if she was polite and compliant.

After donning the suit coat she’d fetched, he gave her an approving smile. “Miss Madison, I’m Sam Davies, the CEO of Pain International.” He held his hand out. (LOL!)

Sam is a really thoughtful and watchful Dom (inside and outside the club), Linda is a strong and loving woman and together they were beautiful. I think the fact that they are both mature added a dimension to their story.

Expecting to see amusement in his gaze, she saw only concern. It didn’t matter. She rose to her feet, rattled when he did the same. But he was the kind of man who’d observe that old-fashioned courtesy. A gentleman sadist.

"May have less muscles, but women got more guts than most men."

Of course this book being part of the Masters of the Shadowlands series, there was also funny moments. And I absolutely can’t wait for Sally, Galen and Vance story!!!