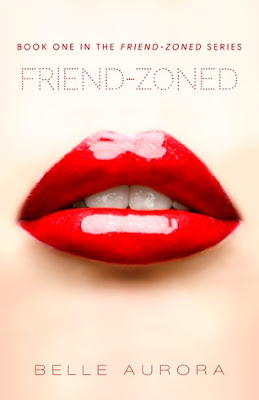 Nikolai Leokov never thought he'd fall in love with the only girl he's ever befriended.

Valentina Tomic has issues with commitment after the ultimate betrayal.

When Tina decides to make broody Nik's day better, she never thought she would end up friends with the hard man.

Nik has never had a woman be so affectionate to him without expecting something in return.

Nik and Tina cordially invite you to read Friend-zoned.

A story of friendship, humour and love.

So I think I am quite hopeless when it comes to romance. Honestly. I tried. BUT I just don't... I dunno.. get it? Well, I get what the author tried to do, and frankly I think loads of people will find it funny and amazing. I however didn't. So yeah, I guess I am a hopeless case.
Thing is I expect this to be cute and fluffy and fun. Which it was in parts, other parts were kinda painful for me.

As example the writing style, was ok. And there were parts that I am aware are supposed to be funny. BUT they just made me roll my eyes. The book is written in Nik and Tina's point of view, but they were extremely similar. So similar that I sometimes wasn't sure which one of the two it was.
The story-line was ok. There were some great ideas. I loved the whole friend-zoned idea. BUT then Aurora crammed in every single cliche there is, and like halfway through I felt like stopping. The only reason I went on, was that I really liked the beginning of the book and I had hope that it got better. It didn't get much better, but also not worse.

The smut is not bad. Though the fist O was a bit creepy if you ask me. LOL

The cliche overload is a huge let down. He is rich, handsome and damaged. She is rich, beautiful and damaged. They have both commitment issues, dark pasts... but they oh so perfectly behave with each other. There are shitty exes on both sides, danger from their pasts. They nearly break up twice..... I am gonna stop now, but trust me there is much much more!

The characters were alright. Sweet and fun and so so so cliche. But honestly I didn't mind that. They make a sweet group of friends. It's the main reason I gave it 2 Stars actually and definitely what makes this an ok book.

My biggest issues with the book besides the length and the overload of clichés it was really soppy at times.
as example:
I never thought of it like that before. I guess I hold the same power over Nik as he has over me. Love is sacred. A gift from one person to another. Love binds people together, no matter how different they might be
I know I am supposed to be move by this...but it makes me roll my eyes, I felt preached to. Let me not even start on all the crying or the other overly emotional behavior. It was definitely not my cup of tea. I do however think allot of girls out there will be really moved out by it... so yeah I guess I am a hopeless case when it comes to romance. It is official now.

I had no intention to read the next book of the series...then is saw its about Asher and Nat. Aaaaaand I might just.
Because I am still holding some hope that maybe just maybe that one will be less emo & cliché dumping and perhaps I am not completely a lost case when it comes to romance?