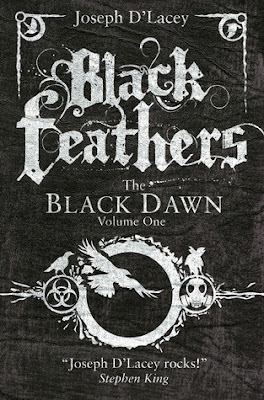 Black Feathers is a modern fantasy set in two epochs: the Black Dawn, a time of environmental apocalypse, and generations into the future in its aftermath, the Bright Day.

In each era, a child undertakes a perilous journey to find a dark messiah known as The Crowman. In their hands lies the fate of the planet as they attempt to discover whether The Crowman is our saviour… or the final incarnation of evil.

Beautiful dark fantasy!
The story is told from two POV and set in two different times. While at times it was rather slow, I enjoyed the way the entire novel was paced, it has a slow steady flow to it. I loved how the two MC, living in different times, experiencing completely different things, still were connected by the same thread and how things slowly unfolded.
The two MCs, Megan and Gordon, are both adolescents who are embarking on a journey of change and discovery. They are connected by their destiny despite a century of difference. I personally found myself more drawn to Megan, but I think partly because Gordon went through a much bigger and stranger change. They are both extremely well written characters and I felt I got to know much about them, but more so I took part in the growth and changes the went through. By the way this is written in 3rd person, so in my opinion it's even harder to bring these things across to the reader. D'Lacey did an incredible job at it.
In fact all characters are written with much insight and are extremely well developed!
The world-building is really well done. I think it's one of my favorite things about the book Megan's time and Gordon's time have such a vast difference that in a way D'Lacey did create two worlds and cleverly connected them. While Gordon's time has a dystopian feel to it, Megan's is more medieval. I really like how they are interlinked and make slowly sense and how in a way either could be real.
The bits about the Crowman are beautiful mystic and enticing. They are so well written they feel like part of real mythology.
The prose was beautiful, dark and a testament to D'Lacey skills as an author.
A wonderful new series, for me it's a must read for dystopia and classic fantasy lovers. I already put the second book on my wishlist for next year