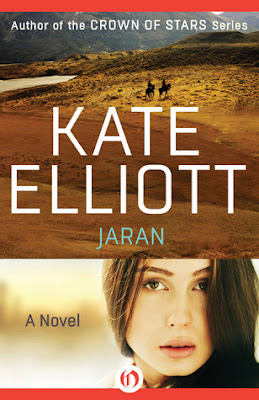 Publisher: Open Road Media
Series: Jaran #1
Pages: 494 Pages (Hardcover)
Genre: Fantasy
Release Date: July 30, 2013 (first published 1992)
Summary:
The first book of Kate Elliott’s epic Novels of the Jaran, set in an alien-controlled galaxy where a young woman seeks to find her own life and love, but is tied to her brother’s revolutionary fate

In the future, Earth is just one of the planets ruled by the vast Chapalii empire. The volatility of these alien overlords is something with which Tess Soerensen is all too familiar. Her brother, Charles, rebelled against them at one time and was rewarded by being elevated into their interstellar system—yet there is reason to believe they murdered his and Tess’s parents.

Struggling to find her place in the world and still mending a broken heart, Tess sneaks aboard a shuttle bound for Rhui, one of her brother’s planets. On the ground, she joins up with the native jaran people, becoming immersed in their nomadic society and customs while also attempting to get to the bottom of a smuggling scheme she encountered on her journey there. As she grows ever closer to the charismatic jaran ruler, Ilya—who is inflamed by an urgent mission of his own—Tess must choose between her feelings for him and her loyalty to her brother.

Jaran is the first volume of the Novels of the Jaran, which continues with An Earthly Crown, His Conquering Sword, and The Law of Becoming.

So so good!
Really! It really really is..
This is a re-release and to be honest I was baffled that I missed this. I could have sworn I read all of Kate Elliotts books. After reading this I did a search around and realised that I it wasn't at my local library nor did my favorite book stores stock any copies of it. SO I am beyond glad that they re-released this. If you like Kate Elliott this is a MUST read.
This is Elliott at her best. Clever world-building and  beautiful prose as always- but more importantly great characters and an interesting relationships.

The plot is interesting, different and yet familiar. Elliot got the timing just right with this one. It feels like a  beautiful melody, right pace, sometimes fast and eventful (action) and sometime slow and thoughtful.
I love traveling so I might be biased since this book is mainly about a journey. But Elliott managed to not only evoke places in my mind but most importantly made me fall in love with the characters. Saying that the book offers not only a journey, there is a political intrigue in the making, battles are fought, romances are struck and there is an entire alien world that still has to be explored.

There is quite a big cast of characters. But while I felt a bit lost in the beginning, I quickly grew to know them and adore them all. The story is mostly told from Tess POV. It does have a few other POVs as well. For me the book showed Tess'es journey - an outward and an inward one. And as she got to know people and their cultures one got to know them as well. I absolutely loved her banter and frien-emy relationship with Ilya.
I think this is very much Elliott's MO, and while I enjoy her world-building and fantasy part always, I honestly am every time much more taken by her character building. This book is definitely way more character-driven. I think the world-building is extremely clever and fascinating, the plot exciting but the characters are what makes this book. Elliott written a whole clan of characters with such insight, that I care for all of them, enjoyed their relationships, laughed and felt sorrow with them and I want to know what will happen to them in the next installment. To be honest, I am not quite as taken by the alien side of the book or the whole political intrigue- but that might change in the next.

As I said the world-building is clever. Elliott did here what she does so well. She took known elements added them to an entirely new world and wrote a new history. In this case we got aliens, different planets but we also have our own human history as a basis. The Jaran do remind me of the mogul and their culture. There is way more to be discovered of this world and I am looking forward to it hopefully in the next few books

The prose is beautiful. I love Elliott's writing style- so I knew I will at least like the prose. And I was not disappointed, I got all the things I love about Elliot and was left marveling again at her skill.