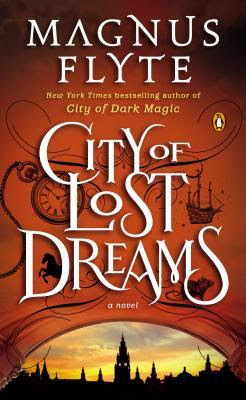 Publisher: Penguine Books
Series: City of Dark Magic #2
Pages: 386
Genre: Fantasy
Release Date: November 26, 2013
Summary:
In this action-packed sequel to City of Dark Magic, we find musicologist Sarah Weston in Vienna in search of a cure for her friend Pollina, who is now gravely ill and who may not have much time left. Meanwhile, Nicolas Pertusato, in London in search of an ancient alchemical cure for the girl, discovers an old enemy is one step ahead of him. In Prague, Prince Max tries to unravel the strange reappearance of a long dead saint while being pursued by a seductive red-headed historian with dark motives of her own.

In the city of Beethoven, Mozart, and Freud, Sarah becomes the target in a deadly web of intrigue that involves a scientist on the run, stolen art, seductive pastries, a few surprises from long-dead alchemists, a distractingly attractive horseman who’s more than a little bloodthirsty, and a trail of secrets and lies. But nothing will be more dangerous than the brilliant and vindictive villain who seeks to bend time itself. Sarah must travel deep into an ancient mystery to save the people she loves.

This left me quite divided. There were aspects in this novel I totally adore and others that simply pissed me off, to put it bluntly. I felt the same about the first novel, by the way.
I think this is very cleverly constructed, but I also felt that it's lacking at times. After reading this, I wanted to know who Magnus Flyte was more than anything else. Because for starters, he got so much right when it comes to describing music and the feeling Prague or Vienna evokes. But on the other hand, he also got so much wrong when it comes to Vienna especially. I was convinced that he didn't live in Vienna or Prague at the end of this. He had to live in the USA in my mind. I also felt he had to have some background in music or possibly history...
Well, I was not so wrong on some level. But Magnus Flyte is a pseudonym for the writing duo of Meg Howrey and Christina Lynch.

The plot, just like in City of Dark Magic is fun. It takes you on a wild goose chaise through history and two fabulous European cities (Prague and Vienna) and end with a mythical fantasy big bash at the end.
I enjoy the murder mysteries this time as much as the last time. And it took me a while to guess who the perpetrator was.

The character building is fabulous for some character and extremely cliche for others.
About a third into this book I suddenly realised that a source of irritation was Sara. I really don't like Sara. I didn't particularly fancy her in the first book, but in this, she downright annoyed me. I found her so opinionated. So ignorant on one level. Then when it comes to her talking music- just wow! it's one of my favorite parts of the book.
I wasn't a fan of Max either, but I didn't mind him. He is a bit all over the place and terribly clueless- quite frankly a bit of a twat. But he didn't annoy me.
Both of them where a bit cliche American actually. Which is one of the things that made me wonder who the author really is. I found it hard to reconcile their obvious great education and good intellects with their totally immature and insensitive behavior. The most annoying bit is definitely their love lives. Who could be that removed of their feelings and so very objective about their sex life?
I think Nico put it just right;
"Did you see Sarah in Vienna?" "Of course." "How is she?" "Same as you,"said Nico. "Tall and stupid"
Nico was my favorite character- he is the flamboyant good hearted fun portion of the book. And added sever really interesting thoughts to the mix.
Pols is simply beautiful. I think she was the most convincing and most moving character. I believed what drove her but also understood her fears and feelings. Amazingly and inspiring written character.

The world building is so very well done! The mix of fantasy and history so cleverly blended, that I had to think hard if certain characters actually existed. In fact I did google Elizabeth Weston, since I had never heard of her. And yes, she did live in Prague in the 16th century and was the stepdaughter of Kelly. I am definitely going to look for her poetry.
I love how Howrey and Lynch brought a historical era back to life. It was one of my favorite bit in the first book. But while the first book was mainly focused on Beethoven. This book went even further in added different historical times and quite a few more characters to the story.  It's done so well, not only are many of the historical facts well research and really accurate.  Flyte managed to paint moments in time so well that they felt real and tangible.

The prose is witty and beautiful at times.
"No eggs should cost that much unless they came with the actual chickens and a handsome farmer who would rub your feet while you ate."
But also the prose was one of my biggest issues in the book.
While in Austria there were many German sentences and terms added, which I really didn't like. First it kind disrupted the flow.
"After Sarah had explained to the polizei what she was doing in the lab and the officers had holstered their guns, an officer had been dispatched to collect Alessandro from the platz."
By the way I speak fluently German, being born in Switzerland. So it wasn't the fact that I did feel i missed something. I just didn't like how it changed the pace. Then and even worse. There were terrible grammatical faults in the German. I hope these will be corrected in the published issue. Because honestly they were atrocious! We talking basic German grammar. Like "mein lieber Pferd"instead of "mein liebes Pferd"
I found Alessandro's English really annoying, the guys graduated at a good American university. Is supposedly a brain and a half. But cant speak basic English? REALLY? I found that not only hard to believe, I found his English so lacking I wanted to take a red marker to it. Honestly, many people take up English as a second language and most of them are capable within a few short month to form decent sentences. Especially if they study or live in English speaking countries.

While I am at it. I found that while some parts of Vienna were so adequately described others were totally off the marker. No Austrian would claim not to understand German- they do speak German. A Swiss on the other hand could have reacted like that.... well, we don't really speak German. We speak Swiss which is basically Aleman.
While I loved the way that Prague was described - in both books. I think they got Austria a wee bit wrong. But not that wrong that any one other than someone who spent their childhood in the neighborhood would pick up on it.  But that slightly too cliche description of Austria, was what made me think- Flyte was possibly never there. And if he was only as a tourist. Which lead me to investigate the authors.

The best part about this novel is the thoughts that I was left with afterwards. In my opinion if a book does manage to reach you, make you think about it, inspires interesting in other topics... that's certainly a good book. And City of Lost Dreams certainly has left me with many things that I've been pondering for the last few days. Immortality, history, medicine, alchemy, love, muscic, healing, Phillipine Welser and their connections are just a few of them.

"The modern idea that one particular formula should work for multiple bodies isn't medicine, it's commerce."

An interesting book that fuses several genre expertly. It brings history back to life in a very unique way. Will inspire music lover and make you think about health, love and life.