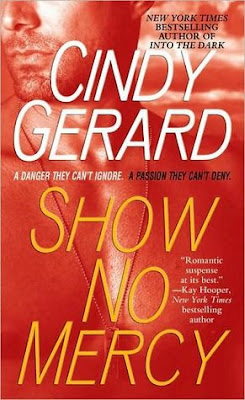 Show No Mercy by Cindy Gerard

Only two things can compel journalist Jenna McMillan back to Buenos Aires after terrorists held her captive there just months before: a rare interview with a shadowy billionaire and the memory of the dark and dangerous man who saved her....

Bad guys, bombs, and bullets are Gabriel Jones's way of life. But he'll never forget the brash redhead he rescued not so long ago...or the passionate kiss they shared before he sent her packing....

AND EXPOSES THE DEEPEST DESIRES.

Now, forced together by a bombing at the National Congress, Jenna and Gabe confront the urgent longings that simmer between them. But this surprise meeting is no coincidence. A ruthless enemy stalks them with deadly precision. The question is...if they make it out alive, will Gabe turn his back on Jenna...again?

I didn't plan to read this one back to back with the Bodyguard series, I just couldn't help it.

The Black Ops Inc. revolves around Nate Black and his boys. Gabe being one of them. They once were all part of the same US army black ops force (Task Force Mercy) but after a mission went sour and another one of their team got killed, Nate Black (their CO) called it quit and created the Black Ops Inc. (BOI). Little after that, Task Force Mercy was dismantled and the boys joined him. They basically do the same kind of missions as when they were in the army but on their own terms (i.e. without external fuck-ups) and with a helluva bigger pay.

Show No Mercy was another great, fast paced and action packed story with great heroes. We met Gabe (Gabriel Jones, aka Archangel) and Jenna in Into the Dark (the last book of the Bodyguard series), where they played a key role. As the plots are somehow related, I recommend to read Into the Dark before reading this one.

Even though the author had serious problems with her time line (see example below), I really liked both stories, the main and the secondary one with Juliana and Nate as well as the epilogue. The only thing I didn't like is (view spoiler)

"Bahia Blanca, Villa Flores
Same night, 11:10 P.M.
Juliana was asleep. Then she was awake.
[...]
She glanced at the bedside clock. Almost two a.m. There was a lot of night ahead. Yet she knew she wouldn’t go back to sleep. She never did when she woke like this."