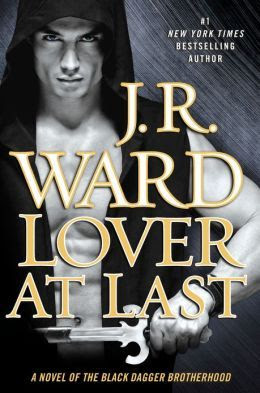 Publisher: Penguin Group (USA)
Series: Black Dagger Brotherhood #11
Pages: 628
Genre: PNR
Release Date: March 26, 2013
Summary:
Qhuinn, son of no one, is used to being on his own. Disavowed from his bloodline, shunned by the aristocracy, he has finally found an identity as one of the most brutal fighters in the war against the Lessening Society. But his life is not complete. Even as the prospect of having a family of his own seems to be within reach, he is empty on the inside, his heart given to another....

Blay, after years of unrequited love, has moved on from his feelings for Qhuinn. And it’s about time: The male has found his perfect match in a Chosen female, and they are going to have a young—just as Qhuinn has always wanted for himself. It’s hard to see the new couple together, but building your life around a pipe dream is just a heartbreak waiting to happen. As he’s learned firsthand.

Fate seems to have taken these vampire soldiers in different directions... but as the battle over the race’s throne intensifies, and new players on the scene in Caldwell create mortal danger for the Brotherhood, Qhuinn finally learns the true definition of courage, and two hearts who are meant to be together... finally become one

Before I start my review, I would like to say two things:
1/ until this book, I was a huge fan of this series;
2/ one of my all time favorite romance book is a MM story.
Usually when a BDB book is released you can't see me online or hear from me until I've finished it. But with this one, I kept pushing its reading. I should have known.
When the mighty fall, damn, but it hurts!
I positively hated the structure of this book and as if that wasn't enough, its content was utterly boring with no plot whatsoever. This book was a mismatch of mostly irrelevant and random boring stuffs. And when I say irrelevant, I mean that they bring strictly nothing to the story. In my opinion, only maybe 10% of it were interesting. And those 10% were constantly interrupted by random crap.

Reading this book, the way it's written, was like watching a movie with someone who can't stop zapping from channel to channel in charge of the remote control. J.R. Ward constantly makes us jump from one short scene to the other. It wasn't only tiresome, that literally drove me crazy. And to top that, the OTT drama, like the story, was all over the place.

D R A M A-D R A M A-D R A M A-D R A M A
--> Blay and Qhuinn have been circling around each other for books now, so you would think that this book would at last set things straight for them. That they will at last have some quality time together. Nope. Until the story reached the 99,26% mark (view spoiler) all that is related to them is drama, drama, drama and some more drama. Even the sex came with drama. Oh, and lets not forget the constant on purpose misunderstandings leading to some more drama... Poor guys, I really feel sorry for them because JRW sure as hell fucked up their story.

Honestly, I couldn't care less about the last 4 protagonists. Because:
1/ when it comes to Xcor and Layla, JRW already used the beauty & beast concept with Zsadist and Bella and I'm not interested AT ALL in reading it again in this series, because as I said, it's been done already but mostly because of who Xcor is.
2/ Why the hell should I care for a random drug dealer and who he's lusting after? Here again, JRW already did the drug dealing stuff with Rehvenge's character. But when Rehvenge was a charismatic anti-hero this Assail character can't hold a candle to him.
As far as I'm concerned, all the passages related to Assail, Sola and the drug business were the perfect examples of the random crap filling up this book.
Also, the lesser business is always the same and it gets old so I understand the need to shift the plot toward political intrigues, the problem is that it's really badly done here.
The few things I liked:
-> If I hated the structure of this book, I liked how JRW adapted the writing to reflect the different characters.
-> The too sparse passages related to the BDB including Layla's pregnancy.
-> Trez, iAm and Rehvenge's participation.