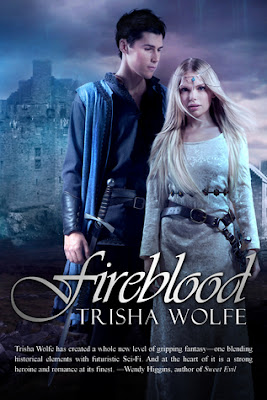 Publisher: Spencer Hill Press
Series: Fireblood #1
Pages: Pages (Hardcover)
Genre: YA, Dystopia
Release Date: December 17, 2013
Summary:
To save a kingdom, Zara must choose between a prince who could be the answer and a rising rebellion that threatens to take control.

But Zara is uncertain about a future under the Rebels’ command and where the prince’s heart truly lies. She must decide who to trust, what to believe, and what she’s truly fighting for before the king destroys all of Karm, including her heart
Rating:

This took me on a nice ride. It's the kind of book that plays on emotions, rather melodramatic but if you're up for the ride, sit back and enjoy it.
It actually reminded me of Deception a lot. Similar storyline, writing style and setting.

For the first few chapters I felt a bit lost, a lot of things didn't make sense and it took me a while to work the whole background story out. After I read this, I found out that there is a novella written and published well before this one. I haven't read it, but I am guessing that it would be advisable to do so. From what I gathered a lot of the world building is done in it and you might not feel as baffled as I was going into this.

Once I got it I found the world building rather clever. Its a mash between Camelot and Dystopia. As the story unfolded more and more things were explained and I found myself fascinated. I think the world building is the best part of this book

The story line is nothing new. Its a fun, melodramatic romance dystopia. Sadly it had one of those annoying love triangles thrown it, i dislike them on the best of days- and really disliked this one. I get what Wolfe was doing, but I found it annoying none the less.  I did like the main love story and would have been happy if Zara would have just liked that one person, without the emo drama for the other guy.
Another issue I had is how fast Zara learnt to ride and sword fight. We talking days here, since this was written over a span of weeks. Seriously?!! I know this is a novel, but she was better than most in a matter of a few training sessions- the others having trained for YEARS.  I get that she is talented, but has Wolfe ever sat on a horse? Because to be able to ride like THAT does take thousands of hours on horse back plus talent- not a few weeks.
The whole thing felt rushed. Especially in the second half. Suddenly the big showdown was there and then all was sorted and HEA.

The character building wasn't bad either. Zara is interesting female lead. She cares and becomes quite the fighter. I found here iffy-ness and her trying to see only the good a bit annoying.
Devlan is the hot brooding loyal knight- and yeah I totally am team Devlan. He made the book for me!
The only character that was actually totally believable, even if rather stereotypical like all of them. Or maybe he was just so hot, I didn't care anymore?
Sebastian was just all over the place. A total contradiction which made him more like a caricature than a person. I didn't buy him.
Fallon & Xander were interesting. There is a backstory, which is told in the novella. I liked them so I might read the novella at a later point.
The support cast was so predictable and so cliche- they just made me laugh half the time. Their actions and responses were not only no surprise,  I would have been able to predict them pages earlier, to the degree where I was hoping desperately that Wolfe would throw in a surprise twist- any twist really. But it never came

The prose is alright. Not really something that will stay with me. I found that Wolfe tried hard to create some depth, but didn't succeed, maybe it's just simple inexperience?

Am I gonna read the next one? Probably, because not matter what this made some fun hours of (girly) reading. If you however expect something deep or surprising, this isn't your book.