Review: Forged in Dreams and Magick by Kat Bastion 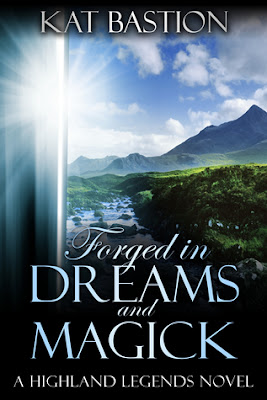 Forged in Dreams and Magick by Kat Bastion

Isobel MacInnes wakes up in present-day California, lunches in medieval Scotland, and by ten days’ end, falls in love with a man and his country, only to lose them in a heart-wrenching twist of fate . . .

Found in the arms of her second soul mate . . .

Forced to balance the delicate strands of time between two millennia . . .

Shocked by revelations rewriting the very foundations of history . . . of everything.

Isobel, a rising-star archaeology student, is dropped into two ancient worlds without warning . . . or her permission. Her fiery spirit resists the dependency thrust upon her. Amid frustration at her lack of control, she helplessly falls in love. Twice.


She struggles to adjust to the unimaginable demands of two leaders of men—a laird in the thirteenth-century Highlands and a Pict chieftain in a more ancient Scotland. Isobel transforms from an academic, hell-bent on obtaining archaeological recognition, to a woman striving to care for those she loves, and ultimately . . . into a fearless warrior risking everything to protect them

I got this from the Author as a proper Hardcopy! 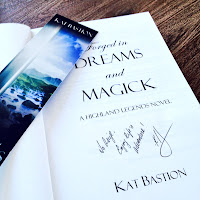 So this does count for my ARC Challenge though strictly speaking its not an ARC...
(Lex agrees ;))


This is kind of a mix between the Time Traveler, the Highlander series and Outlander. So definitely something I would enjoy.
The story line slowly unfolded the new world and new revelations were given at each chapter. I enjoyed the way the novel is paced. It's well thought through and leaves one interested but still time to ponder things.
My biggest issue the love triangle. And this has a major one. I mean a HUGE one. It made me seriously crinch. And I wasn't that impressed with how it was solved. Though I liked the result, don't misunderstand me, it ended exactly how I wanted it, it felt a bit too convenient.  The only positive thing I can say about the dread triangle is that there was always utter honesty. I just could not relate to it at all. And I think without it I would have given this 4stars rather than 3...

The world building was awesome! I love how Bastion travelled time, the Wall and the magic behind it all. It was really well done. I love the idea of time traveling, and Bastion took this to another level. Again, its reminiscent to the three novels I mentioned above, but it's also unique and has a fresh take to it.  My only question I have, do these authors think that Scotland had better weather a few hundred years ago? Because honestly I lived there, and the constant sunshine and warm weather they portray, well it doesn't really feature very often these days...or maybe their characters just don't feel the cold?


The character building is again done really well. Especially the ones of Clan Brodie. I really grew to like them, cared for them and felt like I knew the clan, it's difficulties, their loyalties and little quirkiness. I wasn't a fan of Valloc. But equally I was not that taken by the Pict area. Though I was intrigued by how Bastion worked in some Highland sagas so cleverly.
Isobel was an interesting character- from somewhat timid brilliant archeologist she grew to a feisty and kickass woman.  Though at times I found her rebelliousness a bit pointless.
Ian had my heart from the get go- I mean a hot dude with a brogue? But he also is gentle, loyal, strong and kind. The way he handled everything was really amazing. He was my favorite Character until Scorpius made an appearance... I loved his banter with Isobel! It's the BEST part of the book. And I am looking forward to the next book in the series, since he will take center stage!

I love Bastion's writing style. Despite finding myself annoyed with MC , I simply couldn't put the book down, neither was I able to not be completely enchanted. My favorite bits were definitely the ones  set in the thirteenth-century.

At the end of this I was left with quite a lot of questions. One of them; what happened to Fin?!
Others are to do with the world building. So I am hoping that all my questions will be clarified in the next book. Which brings me to another question? When will it be published?!


I am looking forward to reading  the next installment of the series. In fact I have already read the holiday novella "Bound by Wish and Mistletoe", which I loved as well!

(click on the name for reviews of this geek)
Email ThisBlogThis!Share to TwitterShare to FacebookShare to Pinterest
Labels: 3 Stars, ARC Challenge, Deniz, Paranormal, Review