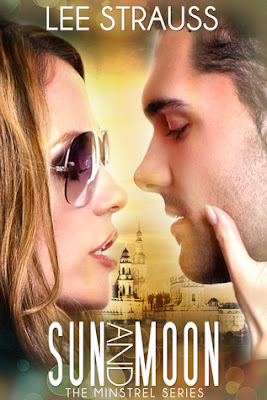 Publisher: ESB Publishing
Series: Minstrel Series #1
Genre: New Adult
Release Date: January 26, 2014
Summary:
She has a past. He has a secret.

Katja’s a risk-taking singer-songwriter hoping to make it in the indie music scene in Dresden, Germany. Micah’s a brooding uptown banker on a quest.

There’s an undeniable attraction between them, a gravitational pull they both struggle to resist. Katja knows she mustn’t fall in love with this handsome enigma. There’s something dark lurking beneath the surface. He could be dangerous.

And even if her life isn’t on the line,
her heart most definitely is.

A sweet story about love, overcoming the past and finding your place in life.

Principally I liked the idea behind this, but my main issue with it: the writing style.  To be frank I don't like it, it's too simplistic in a way. Then I had issues with the whole germane phrases and words in the middle of it and while at other times Strauss decided to use english phrases that not used in german, so made no sense. I never like the use of foreign language phrases packed into a novel. Either we pretend this is set there or we don't.If they supposedly speak in German, and it's written in English just write the whole thing in English. Well at least that's my view on it. I got to admit I'm probably the worst kinda critic in this scenario, I was brought up in Switzerland, so am German speaking, but lived for more than a decade in English speaking countries. Hence I know both languages and cultures really well. In fact I wondered if Strauss had written this in German first... but apparently she hasn't.

The character building was alright. I would have preferred if Strauss would have dug deeper. Like about the whole writing process. I guess it's always way harder to make a connection if it's written in the third person- but I couldn't connect very well with the characters in general.
The biggest issue I had with the character building is that they were all so polarized. They all felt black and white- no grey zone. To be frank in my opinion there are only grey zones in life. Most people aren't just good or bad.
But I did like Katja and I really liked Micah. In fact Micah was my favorite, right from the start. He was definitely mysterious and interesting, but in some ways I feel I know very little about him. He stayed an enigma. Which is a shame.
Katja struck me as childish at times and even more often as selfish and self involved. Then again so are most people at her age. I found her need to run- or her threat of it- totally annoying, then I remembered that I was kinda the same at her age. In many ways Strauss captured her age and her state very well. But I wish that I could have connected with her more. I did feel her pain, her happiness to a degree, but it was like I was watching it from afar, rather than living it, like one does in a really really good book. I am not sure if this is due to the fact that I didn't like the writing style.  After reading this, I just felt kinda sad, because I felt like the character building had lots of potential and lots of thought was put in, but it didn't come through.
Katja did do plenty of growing up through the novel and I love how she took on responsibility and how she found a way to pursue her passion.

The story line was my favorite part of the novel. Definitely a fun and unique idea. I didn't see the first twist, well I knew it was coming but hadn't guessed right. I did however see all the other ones from a mile ahead. They were an obvious must for this genre, but I really enjoyed it non the less.
I love how Strauss brought in the indie music scene. A scene that has been close to my heart since my teens, which is the reason I was interested in the book in the first place. The idea of adding soundtracks at the end is fabulous and I loved the songs. I can imagine being a big fan of Katja myself. (In my head she sounds fabulous similar to Julia Stone actually)

A book that has huge potential but fell a bit short in the execution.