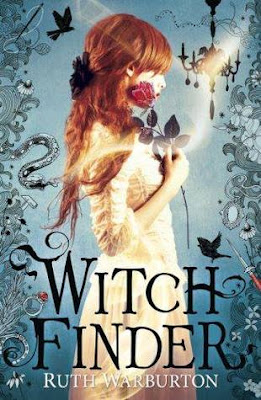 Luke’s final test is to pick a name at random from the Book of Witches, a name he must track down and kill within a month, or face death himself. Luke knows that tonight will change his life forever. But when he picks out sixteen-year-old Rosa Greenwood, Luke has no idea that his task will be harder than he could ever imagine


This sounded so good. I was really looking forward to this, Really I was.
But within 10pages or so I could have told where this is going. Seriously I kid you not. It's that predictable. Which kinda made this incredibly boring. But while I found it slightly disappointing, I had still some hope. See the plot was A to B to C, but Warburton's writing style is really enjoyable and I felt that maybe she will exceed in Character building. I wrote this off as a girly fantasy, thinking that I prefer the more epic fantasies, but that lots of female readers would so enjoy it. Just look at the cover. It is definitely gear for the girls. And the cover slut in me was drawn to book partly because it is a pretty cover after all. So I had hope. Surely Warburton, who obviously can write, will add something that will compel me. Character building will be ok. Something will be ok...as I said I had hope.
Well, at least for the first half of the book.Then it all went to the pits. There was insta-love, beyond predictable drama and still no character building.

While Warburton took care to describe a Victorian London and added some magic elements to it. I wasn't overly impressed by the world building. I would have preferred if she would have strayed more from the reality that the social classes presented in victorian England and added more fantasy to it. Looking at this as a historical novel, this is well researched. But somehow it doesn't work as social criticism. It's to cliche romance for that. And maybe if the character building would have been better, I would have felt more intrigued by the idea behind the world building. But as it is. It's real world just add some witches and magic- and that's the world of Witch Finder.

The character building is practically non-existent. As I said I had high hope here. But Warburton didn't come through on this part for me. I don't dislike Luke or Rosa. But I couldn't connect to either of them. Their connection to each other? A big question mark at best. I simply didn't buy it. I would have understood that Luke couldn't go through. But the sudden change of their relationship and their declarations?! UGH!! It ruined the book for me. If this wouldn't have been an ARC I would have stopped reading right there and then. And I felt like giving this 1Star at that point.
But I did finish, sadly I got no surprise even to the end. I am not quite sure where Warburton is going with this in her next book, but I got a pretty good idea. And sadly I have no interest in reading it.
Honestly if Warburton writing style wouldn't be that good I wouldn't have had hope and probably just excepted that it was a girly predictable light weight novel. BUT she can write, really well, and I feel let down. I think that this could have been better, way better.
Look while the main idea isn't new, the romance predictable there is potential here and Warburton should have dug deeper and somehow made it more.

This is a book for girls that feel like a light historical romance with some magical elements. If you like me have read countless fantasies- a witch book being one of your first books you read - you might, just like me, be left disappointed.