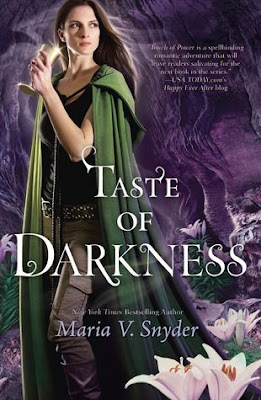 Avry knows hardship and trouble. She fought the plague and survived. She took on King Tohon and defeated him. But now her heart-mate, Kerrick, is missing, and Avry fears he's gone forever.

But there's a more immediate threat. The Skeleton King plots to claim the Fifteen Realms for his own. With armies in disarray and the dead not staying down, Avry's healing powers are needed now more than ever.Torn between love and loyalty, Avry must choose her path carefully. For the future of her world depends on her decision

If I had to describe Taste of Darkness with one word, I would probably choose lacklustre.
Sadly so, and with great regret because Touch of Power was one of my favorite reads in 2012, not only that, one of my favorite fantasy book. I adored Avery and her boys. Loved the storyline and world building, but my favorite part was the character building. And we all know I am a sucker for great character driven novels.  Scent of Magic was more plot driven. And one of the disappointing sequels of 2013- i chalked it up to second book syndrome. But sadly Taste of Darkness wasn't better, it was worse in my opinion.

Look if I am honest, if Touch of Power wasn't so awesome, I would have had less expectation. So I all fairness I rounded the 2,5Stars up.

Snyder writes really well. I love her writing style. But this time around the great dialogues felt a bit flat. They were way more fun the first time around. She definitely know her craft extremely, and this come through in this novel as well.

The character building was mainly made in the first book, there are some new developments. Flea is the biggest change, I actually loved how he grew and changed and took on the change of things. Kerrick was less stoic in this book, one of the things I found a bit annoying in Scent of Magic about him. But I found his desperation for Avery a bit grating, let's not even talk about his jealousy. Annoying deluxe. Avery was same old same old, and while her stubbornness was fun and cute in the first couple of novels- well let's just say the fun and cute factor wore off. A lot.
But in general it was fun to revisit the group- and the group has become quite a number of people. And I knew who they were despite my rather nonexistent name memory, which speaks for Snyders writing skills. And while I am being super critical about the characters, I should mention, that the character building is still pretty awesome.

The story line was well - a mash between first and the second book somewhat. Be prepared for a million and one rescue ops. I don't find them quite as enticing as I did in the first book. Then there was the "big"showdown. Which was not that big after all. And the end, while it was satisfying at some level, it was kinda well underwhelming. If I would have to describe the plot in a few words this would be it: rescue operations (like a million of it), research, arguing, friendship, fighting, discoveries and tidbits of lovey-dove- the end. In my opinion the story line was a bit all over the place, it felt like there were some event just added up and then at 90% the show down happened. By that point I was actually wondering if Snyder is planning to finish the story or writing another book. Which quite frankly I probably wouldn't have read. But then it did happen, a rather underwhelming and lacklustre experience actually. The finishing bits were actually rather nice and left me pleased. Still it took me 4days!! to work through this. Because it felt mechanic and to a degree tedious.

Which leads me to the question that plagued me from about 20% into Taste of Darkness. Why did Snyder write 3 Books?! Why not do a standalone? Why pull this over more than a 1000pages? Ok maybe two books I would understand, but three? It makes no sense, because not much is gained reading this third book. So sadly a totally underwhelming finish to a series. Though it does give you closure

A book for the fans of the author and the series. Still be warned it will take you one a ridiculous amount of rescue ops and there will be plenty of not so cute arguing.