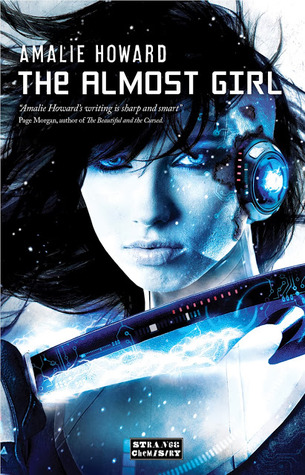 The Almost Girl by Amalie Howard

Publisher:  Strange Chemistry
Pages: Kindle Edition, 416 pages
Genre: Dystopia, YA
Release Date: January 7, 2014
Summary:
Seventeen-year-old Riven is as tough as they come. Coming from a world ravaged by a devastating android war, she has to be. There’s no room for softness, no room for emotion, no room for mistakes. A Legion General, she is the right hand of the young Prince of Neospes, a parallel universe to Earth. In Neospes, she has everything: rank, responsibility and respect. But when Prince Cale sends her away to find his long-lost brother, Caden, who has been spirited back to modern day Earth, Riven finds herself in uncharted territory.

Thrown out of her comfort zone but with the mindset of a soldier, Riven has to learn how to be a girl in a realm that is the opposite of what she knows. Riven isn’t prepared for the beauty of a world that is unlike her own in so many ways. Nor is she prepared to feel something more than indifference for the very target she seeks. Caden is nothing like Cale, but he makes something in her come alive, igniting a spark deep down that goes against every cell in her body. For the first time in her life, Riven isn’t sure about her purpose, about her calling. Torn between duty and desire, she must decide whether Caden is simply a target or whether he is something more.

Faced with hideous reanimated Vector soldiers from her own world with agendas of their own, as well as an unexpected reunion with a sister who despises her, it is a race against time to bring Caden back to Neospes. But things aren’t always as they seem, and Riven will have to search for truth. Family betrayals and royal coups are only the tip of the iceberg. Will Riven be able to find the strength to defy her very nature? Or will she become the monstrous soldier she was designed to be?

How do I put this gently? Riven, the female MC in this book, whose name actually means to tear apart, who is such a narcissist, who claims to be all deadly and powerful, is actually a vain, conceited bitch? Why do I say such a rude thing about a supposedly strong MC who has kickass fighting skills? Well, let’s backtrack a little.

The book is divided in two sections. One is setup in a high school (where all YA action happens, obviously) and the other in a planet (place?) called Neopses. Riven is a Legion Commander from her planet, a living prodigy, one to be the youngest commander at the age of 17, on a mission sent from the Prince himself (who is also her bff btw) to find the target and take him back to her planet. The target, as you would have mostly likely guessed (read in the blurb), is none other than our hero, Caden. Now before I move ahead, let’s just talk about how dreamy our lover boy is, shall we? Caden is a guy who a) calls his own girlfriend a bitch, b) full on flirts and makes out with another girl when he’s in a relationship with the said bitch (But he makes out with our Riven! That makes it so much more romantic right? Right? ???? No.) and c) is such a horny teenager that he would rather jump Riven’s bones then actually focus on the task at hand or feel sorry about his losses.

But moving on, let’s focus on the plot holes from here on, hmm? So, Riven has been on Earth for about 3 years but only recently her body starts shutting down because of her over exerting herself or something. I mean her bff/Prince, Cale, whose father was killed by his own uncle has been sick all this time but just recently Riven’s urgency to find the target has grown to the point that she has an “allergic reaction” to our planet. Her body goes into shock, stops working while she’s riding a fucking Ducati (attention-seeking much?) so that she is conveniently saved by Caden; the same guy who is in her class but she failed to notice when she’s supposed to be all so vigilant. Shit starts happening after she has recovered and met her sister Shae. Her megalomaniac father sends his dead creations called Vectors to capture her from all across the Universe, but somehow (even though he’s supposed to be so brilliant) forgets to reset the Vectors coding to not follow Riven’s commands who was their commander 3 fucking years ago. Anyway, after some action and revelations, when they land on Neopses (don’t even get me started on how vague the world building for Neopses is) our ever so strong and lithe commander is yet again in need of saving. I guess Riven never heard of the saying that “Action speaks louder than words”.

So, as predicted there is this entire coup led by someone I hadn’t predicted coming into picture in the second half of the book. However, it is so hastily put together that I was skipping through most of it. A lot of it is talking since the scheming is already done. The action is limited to a few pages towards the end with a fizzled out ending that left me completely dissatisfied. But before I wrap up my review, there is another recurring issue that had me thoroughly exasperated: the incongruent timelines. In the beginning it was mentioned that Caden went to a beach trip with his mom when he was 8 years of age but then just in the next page it was mentioned that his mom died when he was only 7 years old. Another instance was where Caden mentioned that Shae had him join ballroom dance and was very strict with his routine sword fighting or whatever since a very young age, but how old was Shae really? If her lover as mentioned later in the book was only 20 years of age, then I can’t expect her to be older than that, right? If Caden has been doing this since he was 7 or 8 that means Shae had been with him all along. But Shae ran away from Neopses when she was what? Is it just me forgetting this detail or was it mentioned somewhere that I missed? Anyway, so if we suppose that Shae was 10 when Cade was 7, could someone explain to me how a 10 year old has this much authority or experience to train a kid? Does that mean that Shae had been everting all her life? Gah, this is sooo confusing.