Book of the Week 1

Missing my regular buddy reads I decided to get back to the infamous Book of the Week. I wanna keep this up for every weekend for 2014 (I know, I know this sounds like another challenge, but hey if you can't beat them..)
So here is the first weekend read. Sheryl, Dani and I had planned to do this as a buddy read way back when this was due to be published... before the first postponement around 6 Months ago. Finally being released on January 1st- we read it last Sunday. 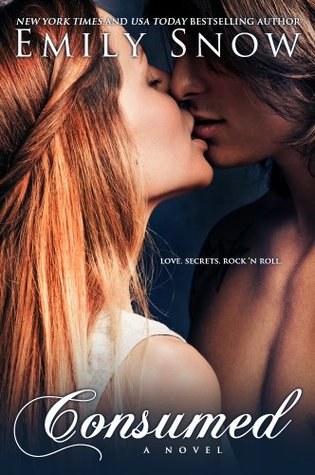 
Series: Devoured #2
Pages: Kindle Edition, 176 pages
Genre: New Adult
Release Date: January 1, 2014
Summary:
Now that Lucas is back in her life, Sienna is sure the drama between them is over. But then he comes to her with a new offer: his band, Your Toxic Sequel, is going on tour and he wants her with him—working in wardrobe and as his girl.

Then the letters start to come—harassing messages from Lucas’s ex-wife, Sam.

At first, Sienna brushes them off, keeping Lucas in the dark because Sam is bad for his music. But after Sam’s contact turns personal and violent, Sienna has no other choice but to confront Lucas. If she’s ever going to understand the twisted pull Sam has on him, she has to know his secret. But when he finally reveals it, will they be able to survive the consequences? Or will it tear them apart, consuming them?

Sooo this was.. well.. I honestly don't know.
I guess the best thing I can say about this is, it gave me closure on Lucas and Sienna's story.
But it left me wondering plenty - and about the story or it's character. No about the author, the publishing world and mostly why?

Then it also made me question about my rather awkward relation ship I have with the romance genre. It rather a love-hate thing me and romance novels have going on reading consumed gave me closure on that as well. Definitely an achievement- something all those romance novels I read before hadn't managed to do. I realised while I was reading this, that I am just particular, not just when it comes to romance novel, I am the same with other novels. But when it comes to romance novels I judge the book mostly by character building. So if I love the character building- I most likely will like the book. The fact that I like the writing style is a given, since that's the most important part of a book for me.  When it comes to plot, i loath insta-love, don't like the one and only theme and am allergic to the tedious love triangle.... but if the plot is alright, the character building is great - I will like the book.
Now you must wonder why I blabber on about this? Well because those are the reasons why I liked Devoured...
Let's face it; Snow knows how to write. I love the way she writes. And while some of the smut scene, were uhm not my scenes, they are undeniable hot!
BUT after finishing Consumed, I can't say that I didn't like it. I wasn't in awe either. It just was. I don't know! And thats the crux.
The character building is not shabby- but there was no growth for either Lucas or Sienna.
I should add that this is written from Lucas's and Sienna's POV. And their voices are extremely distinctive. As I said, there is no doubt that Snow is a good writer. I love Lucas's POV! Seriously love them!

The plot was ok- well to be honest I kinda was bored in the middle and needed a break.
There was this super drama at about 90% - we finally heard the BIG secret. And then, it was all solved and over...  Basically not much happened
I am one of these people who waited for the release of this book. Checked every week if it actually is finally out. Bought it on release day. And well, I feel a bit let down.
I don't feel that there was much gained by the sequel. I don't know why there was a sequel. I mean its not even 200pages. So like a few times in the last few months I am wondering why Devoured wasn't a stand-alone?! Why write a sequel at all? Why not finish Devoured, with a bit more closure than it was done? I am not even going to mention the continuous postponement of release date. But honestly this could have been avoided by not doing a sequel that doesn't do much for me...

Saying this- I think loads of people will love it. It does have some mooshy lovey bits, good smut and an ending that most adore.
I personally feel Snow could have done better. And I expected  way more. Which left me wafering between ok and good - literally. So I guess this should be 2,5Stars. But you see... I just don't know! 2,5Stars seem kinda harsh. It is well written after all. BUT 3Stars... well I as I said I just don't know.

Will I read more of Snow? You bet!

We reading it this Sunday- if you wanna join me, leave a comment? Let's chat about it while we reading it and after we done.