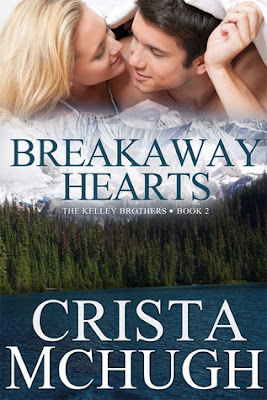 Publisher: Crista McHugh
Series: Kelly Brothers #2
Pages: 198 Pages (Paperback)
Genre: Contemporary, Romance
Release Date: February 3, 2014
Summary:
Hockey star Ben Kelly has retreated to his mountain cabin in the ski town of Cascade, BC, to recuperate from a season-ending knee injury and contemplate his future in the NHL. He never expects to run into the one woman who got away. Nine years may have passed, but nothing has dulled the explosive chemistry between them. Now he wants more than just one night.

Hailey Eriksson had Olympic-sized dreams until an accidental pregnancy from a one-night stand halted her ambitions. Her life was shattered when her son died. Nothing will keep her from fulfilling her promise to him to make the Olympic team, especially not the charming Ben Kelly. Unfortunately, he’s out of sweep her off her feet this time, and she finds him harder and harder to resist with each passionate kiss. But when he learns about the child he never knew, will their rekindled romance be on thin ice?

McHugh got me fangirling on many levels on this one. First Ben- a hockey player.. need I say more? Then the whole sports injury thing... add to that the entire hockey thing.. I mean winter sports! I am a winter romance kinda girl- because of winter sports!  BUT mostly this is a serious cute and fluffy fix!

Was the story line surprising with unpredictable twists and turns? Uhm, I wish I could say no. It was utterly predictable no surprises anywhere. But did I care? NOPE.
In fact while this one had insta-lust, unlike in the first book I found Ben and Hailey build up their relationship in a way more realistic way. Which is why I enjoyed this book more.
Oh and as before the smut didn't disappoint, at all.

The character building is done well, as in the last book. I like Hailey and Ben. The book is written alternating from both their POVs and they have different voices. I could relate to their fears and passions. I like them probably better than Adam and Lia. But then again I wasn't really into their insta-love relationship, so this could be the big damper there. It was nice to get glimpses of Adam again. I really like the relationship the brothers have. And I liked Patrick as well. Seems McHugh writes  swoon-worthy dude characters seriously well!
Both Hailey and Ben do some serious growth during the story and over come their difficulties. I really enjoyed that part of the novel - besides the romance bit. Which I have to admit I was all gooey over. But in my defense, Ben is a hockey player damnit! I never had a chance there did it?
The only thing again was that the support characters were rather cliche again. The stepmum and dad- were your run of the mill kinda characters. But again I couldn't care less. Because Hailey and Ben made up for it more than enough!


I have read quite a few of McHugh's books, so it's safe to expect that I will like her writing style. And I wasn't disappointed at all. In fact she wowed me with her writing about skating- I mean it's so good. I felt the ice calling me! I should maybe explain that I am in Cape Town at the moment, it's in the middle of summer here... so feeling like I wanna be back on the ice  right this moment is quite a feat. She also got the getting back after an injury thing so right. See I had a knee injury snow boarding- took quite a bit of guts to get back on the board, back in the game. Ben's worries, his fears and his reaction was so well written- it was so similar to how I felt at the time of my injury.
I left me wondering- how did McHugh get it so right? Does she play hockey? Did she have a knee injury as well? Seriously well written for sure.

Which leaves me with a million of questions- few are about the series. Most importantly is McHugh writing a book for each Kelly brother? PLEASE let the answer be yes!
But I wanna know how does McHugh write one novel about the food business and the next about hockey --- and I am freakn awed by both of them with her background knowledge and insight! HOW? I want an interview! I wanna know who Crista McHugh is and how does she go about writing these kind of novels?
oh and how do I get my hands on the next sequel of this?