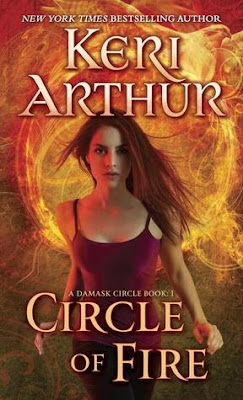 Circle of Fire by Keri Arthur

Sixteen teenagers taken from their homes. Eleven bodies recovered, each completely drained of blood. Some believe vampires are responsible. Jon Barnett knows that what’s happening is far worse. Sent by a group of paranormal investigators known as the Damask Circle, Jon quickly becomes enmeshed in a web of black magic and realizes he needs help. But fate gives him only one choice.

Madeline Smith has retreated to an isolated farmhouse, afraid of the abilities she cannot control—abilities that have killed. But when a “ghost” brings a warning of danger and her nephew goes missing, Maddie not only has to leave her haven, she has to place her trust in a man who is neither ghost nor human. As the noose of sorcery tightens, the search for the teenagers becomes a race against time. But the greatest danger to Maddie and Jon could be the intense feelings they refuse to acknowledge but cannot ignore.

Another re-release of a Keri Arthur Series, having read her Nikki & Michael re-release last year I was excited about getting this one.

It wasn't disappointing. The two things I liked best in Nikki & Michael were present as well in Circle of Fire. Her writing style. Well knowing me it should be clear that, reading more than one book by Arthur, means I like her writing style. And I really enjoyed her prose again this time around. There were several bits and pieces put in so cleverly that I found myself noticing how well Arthur does know her craft.

The second was the world building. While it's on the first glance quite simple an Urban-Fantasy, somehow Arthur does always manage to bring in some serious fun invention. It's subtle - and so close to reality that one nearly could believe that they all out there, all those shape-shifters, vampires, witches, sylphs.. you name it. She cleverly uses what we kinda "know" in general about those paranormal beings and adds her own twist to it.

Saying all this positive things though doesn't warrant my rating, I guess.  But you see, I kinda got bored - well maybe this is a bit strong- ok, sidetracked or distracted - take your pick- around 85% in. Not because there wasn't much action or the world building wasn't good.. but because the MO of this was rather similar as the Nikki&Michael Books and honestly it was rather clear what will happen and how it will end.  Which brings me to the storyline
It is seriously predictable PNR. I guess one could say that quite often. But the mystery was not mysterious enough, the romance way to straight forward and the action... well to much by the book. The smut- full of shortcomings. It was too brief, too fast and too unemotional -I can't believe I am saying these things, I always complain about the exact opposite, but yeah it was seriously lacking. If one decided to write the scenes out, it should be good smut- I don't need 50pages (gosh please not! I am still scared by the book that had the 50page scene!) but half a page? uhm why not just fade it out. I just felt like--- that was it?! And at the end of the book I thought..what? That was all the smut?! Only one extremely short scene?


The character building was interesting and at time actually rather grating. This is written from Jon and Maddie's POV, though it is written in third person, their voices are actually rather distinct. I found their internal struggles interesting and could relate. Except Maddie was a tad bit to angsty for me at the beginning and Jon was to irritatingly reluctant at the end. My issue was their chemistry. And I am sadly gonna compare this AGAIN to Nikki&Michael- but seriously their chemistry is what made those books. Jon and Maddie started off having quite good chemistry - and then they were just needy and I didn't really get their chemistry in any of their transaction.

A solid start to a series. A fun book for PNR lovers.
Am I gonna read the next book? Yep, I actually went back to Netgalley to request it straight after I finished this.