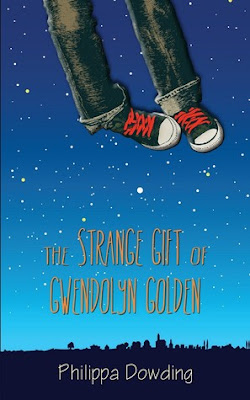 The Strange Gift of Gwendolyn Golden by Philippa Dowding

Publisher: Dundurn Group
Pages: 200 Pages (Hardcover)
Genre: Middle Grade, Children
Release Date: February 18, 2014
Summary:
This morning, I woke up on the ceiling ... So begins the strange story of Gwendolyn Golden. One perfectly ordinary day for no apparent reason, she wakes up floating around her room like one of her little brother’s Batman balloons.

Puberty is weird enough. Everyone already thinks she’s an oddball with anger issues because her father vanished in a mysterious storm one night when she was six. Then there are the mean, false rumours people are spreading about her at school. On top of all that, now she’s a flying freak.

How can she tell her best friend or her mother? How can she live her life? After Gwendolyn almost meets disaster flying too high and too fast one night, help arrives from the most unexpected place. And stranger still? She’s not alone.

Sadly this is another book, that I liked the idea of but didn't enjoy actually reading it. Seems like I've been picking those ones up allot lately.

My main issue here was the writing style. It was too simplistic. The fact that nearly every second sentence started with I & a verb kinda grated on me. It felt unpolished and immature somehow. I guess this is for middle grade kids. A fact I wasn't aware off for some reason I kinda thought this was YA. But though it's been a while since I read middle grade stuff I am sure that the books I liked were written with more.. I don't know..flair, flourish better sentence structures?


The story line is quite fun to start of with. It made me smile and the way Gwendolyn wakes up made me kinda think of Kafka's Metamorphosis. As I said I like the idea of this.
But then it got rather slow in the middle part. It was quite a struggle to get through - and I'm not sure I would have read on if this wouldn't have been an ARC. It did get more interesting towards the end. But I was left with quite a few questions. Though there was no indication of it anywhere, I assume there might be a sequel? If not, one gets seriously left hanging at the end, not that the story isn't at a cliffhanger, but as I said too many questions were left unanswered .
And actually not much impressive stuff happens, so it's sweet but not exciting or awe inspiring or anything to be amazed with.

The world building was quite sweet but not again not that impressive. In fact many of the questions I was left with are to do with the world building, so I guess it's safe to say it's incomplete at best.


The character building is pretty well done for Gwendolyn, her struggles with growing up and her strange gift are really well relatable. I like her, loved her sense of humor.. but she is also pretty immature. Sadly none of the characters did develop much, which meant I kinda lost interest.

This is a book for middle grade only.