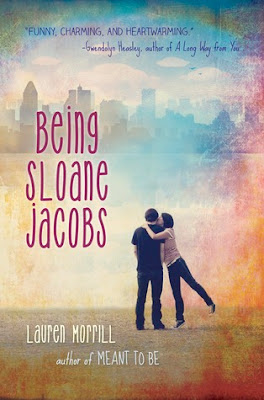 Being Sloan Jacobs By Lauren Morril

Publisher: Delacorte Press
Pages: Kindle Edition, 354 pages
Genre: Young Adult
Release Date: January 7, 2014
Summary:
A new novel about following your dreams . . . and finding your heart from the author of Meant to Be. Meet Sloane Emily Jacobs: a seriously stressed-out figure skater who choked during junior nationals and isn't sure she's ready for a comeback. What she does know is that she'd give anything to escape the mass of misery that is her life.

Now meet Sloane Devon Jacobs, a spunky ice hockey player who's been suspended from her team for too many aggressive hip checks. Her punishment? Hockey camp, now, when she's playing the worst she's ever played. If she messes up? Her life will be over.

When the two Sloanes meet by chance and decide to trade places for the summer, each girl thinks she's the lucky one. But it didn't occur to Sloane E. that while avoiding sequins and axels she might meet a hockey hottie—and Sloane D. never expected to run into a familiar (and very good-looking) face from home. It's not long before the Sloanes discover that convincing people you're someone else might be more difficult than being yourself.


“Escaping from your own life and fitting perfectly—and hilariously imperfectly—into someone else’s? Who doesn’t fantasize about that? Morrill nails this unforgettable story full of twists and romance.”—Huntley Fitzpatrick, author of My Life Next Door


I adored Meant To Be. It was super cute and fluffy. A sweet love story, great characters and great writing style. So when Morrill finally released another novel- I was so excited. I got a whole bunch of my reading friends to read it. Because you can't go wrong with reading Morrill, I told them.
Well, I wasn't correct. Though I wasn't quite wrong either.
See the first issue I had was the story line. It reminded me of a book, I read as a kid. (a middle grade book) We talking ALOT. Well basically it was super similar except there was Iceskating and Hockey at summer camp - and there were 17year olds not 13year olds so the romance bit was about them not their parents.
I found myself kinda bored after 30% - and l love hockey and ice skating. Winter sports was always my thing plus I was brought up in Heidiland... it would be considered criminal there if I wouldn't. I don't feel that Morrill did either sport justice. I do see that she tried to point out the difficulties in both of them. But I felt like she wasn't sure if she is writing a fun and cute book -- all the pranks ect.. or a serious sports critique trying to point out the difficulties and downfall of young athletes. Personally I feel she fell short on both.
I would have been fine with this I guess.. but I really really am not a fan of the characters. First and foremost I didn't care for any of them very much. I found them all rather immature actually, they behaved more than half the time like 14year olds. I found them seriously mean, not in a fun way mean but sadly in a making crinch cliche way. The "nemesis's" were the worst. I mean can you spell Bitch de lux all wrapped up in every corny teen movie cliche? The besties? Gay African American Figure Skater? UGHHHH!!!! Don't misunderstand me, I don't have issues with someone who is gay and happens to be African American- but it just felt like your typical Hollywood kinda thing to do. Why couldn't he be a hockey guy? or whatever! This is just too much your typical teen movie for me.
I couldn't relate to either Sloan, though I am not sure why this is. I know what Morrill tried to do, but I think that my experiences in competing in winter sports were just so different that I simply couldn't get into it. Also again, they are both rather stereo typical characters, especially considering their backgrounds. The only redeeming characters were the boys. The romance was sweet - once it finally happened and Morrill can write mysterious, cute boy characters. I would be totally into both of them!
The writing style is solid just like I expected. And while I found this not to be to my taste, I definitely will be picking up Morrill's next novel.
Honestly I think a lot of people are going to find this cute and fun and enjoy it. Personally it was just too much of your cliche teen movie.

(click on the name for reviews of this geek)
Email ThisBlogThis!Share to TwitterShare to FacebookShare to Pinterest
Labels: 2.5Stars, BOTW, Deniz, Review, Young Adult