BotW 3: Bunny and the Bear by Eve Langlais 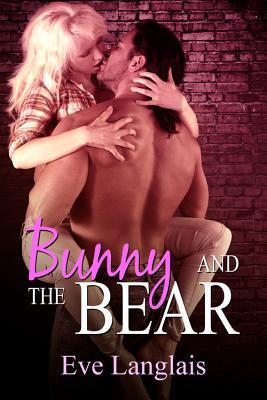 Bunny and the Bear by Eve Langlais

Bears and bunnies aren’t supposed to mix, or that’s what Chase keeps telling himself when his bouncy new neighbor won’t stay out of his business—and his mind. However, the more he gets to know his overly perky neighbor, the more he craves her—naked in his grasp—a desire worse than his addiction to honey and pie.

Miranda’s on a mission for the Furry United Coalition, and it involves secretly guarding one grumpy ol’ bear. Staying focused on the job isn’t easy when all she can think about is turning his frown upside down, a task made harder when she gets a glimpse of his passion. When she hears about his theory on woodland creatures and predators not mixing, she thinks all is lost, but she didn’t count on a bear’s curious nature—and possessive need.

When an evil force abducts Chase, Miranda unleashes her bunny in order to save him, but the revelation of her shifter side puts her in danger. Is one ornery bear enough to save her from a mad scientist? And if he does, can a bear forget her woodland creature status long enough to love her and make her his mate?

Warning: Pies were harmed in the making of this story and naughty references made about honey that might offend some readers

***This review is an early birthday present to a dear friend and contains a lot of dirty language and quotes. I would strongly recommend you not to read this review.***

EDIT: Since I forgot to mention, Geri, my other darling friend, who was the one to recommend we do a buddy read of this book for our friend Alisa's birthday, I hope you enjoy the review. :P
Once in your lifetime you come across something you never imagined yourself doing. But then you take it all in stride and do it nonetheless, with all the bravery you can muster. This book has been one of that once in a lifetime experience for me and well, it didn’t suck as much as I thought it would.
The title and the cover says it all, doesn’t it? But if you need the plot of the story, it goes like this. Once upon a time there was an organization called the FUC (Furry United Coalition). *cue awkward silence*
*clears throat* FUC was a secret organization in the human world that protected the shape-shifters without their knowledge. Think of them as CIA for the furry shape-shifters. But here’s a funny thing, they even had reptile shifters, which is weird since it’s called Furry and reptiles don’t have fur. Anyway, ignoring the discriminating factor and getting back to the story, there have been disappearances among the shifters by some unknown villain (whose identity is not even revealed at the end) and this has got the FUC a serious case to crack. Our female protagonist, Miranda, a hybrid, saber-toothed bunny is assigned to protect a grizzly bear called Chase Brownsmith as he’s suspected to be the next victim.
I was surprised by the existence of a plot but what makes this story feel like reading a porn movie’s script is the conversation, interaction and actions of the bear and the bunny (Even if it is a porn movie with a plot, it’s still porn). The first time they meet, the bouncy, bubbly bunny is wearing shorts short enough to let the grouchy, irritable bear know that she shaves, which predictably gives him a hard on so strong that he fears his pants would tear off. Err.. quite the mental image after reading like ten lines, eh?

Anyway, the bunny pretty much stalks the bear while having thoughts of getting pounded by him constantly. Meanwhile, the bear can’t stop himself from fantasizing about his so-called delectable honey bun.

The bear tries to behave a lot, by keeping his boner in check.

But the bunny is a naughty little vixen according to the grizzly.

But here’s the plot twist: the bear doesn’t want to interbreed because he wants to keep his lineage pure. The bunny is hurt, obviously. Bunnies have feelings you stupid hairy bear!
He tries to keep his vow for like 50% of the book. There’s only kissing till then. He breaks when he gets kidnapped after someone drugs his morning honey buns (and he’s supposed to be a bear with a great nose *snorts*) and his neighbor bunny rescues him, showing off her freaky bunny skills.
I swear, by that point I was convinced that all the bunny could do was this:

But actually that bunny turned out to be more of this:

Finally, when the bear has been rescued and has patched up the hurt, burnt and shot bunny, the inevitable happens. They do it. And then there’s no stopping them.
They keep on doing it. And doing it. And.Doing.IT.
It wasn’t as disgusting as I had braced myself for (view spoiler) but their dirty talking made me go like:

All in all, I finished it without losing a huge chunk of my sanity. In fact, I enjoyed a good laugh here and there because of the ridiculousness of it all. Here are a few lines from the story for you to enjoy:

“No, but he knew a sweet pastry he’d like to taste”

"And what about her full hips made for bearing cubs?”

“Mmm, Chase. What a fabulous name. I bet you get girls asking you all the time to chase them through the woods.”

After a while, I stopped noticing such things and just went along with the flow you know?
Agreed, my expression was all like this during the smut:

It wasn’t a very terrible or awkward read after all.
2 stars.