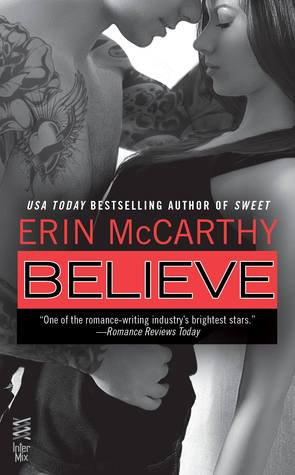 Publisher: Penguin Group (USA)
Series: True Believers #3
Genre: New Adult
Release Date: January 21st 2014
Summary:
Robin used to be a party girl… until she got black out drunk and woke up in bed with her best friend's boyfriend. Now she's faced with being THAT girl, and couldn't be more disgusted with herself. She can't even tell her friends the reason for her sudden sobriety and she avoids everyone until she meets Phoenix—quiet, tattooed, and different in every way that's good and oh, so bad…

Phoenix is two days out of jail when he meets Robin at his cousin's house, and he knows that he has no business talking to her, but he's drawn to her quiet demeanor, sweet smile, and artistic talent. She doesn't care that he's done time, or that he only has five bucks to his name, and she supports his goal to be a tattoo artist.

But Phoenix knows Robin has a secret, and that it's a naïve dream to believe that his record won't catch up with them at some point. Though neither is prepared for the explosive result when the past collides with the present…

When I got a mail from Netgalley, that I was pre-approved to read this. I immediately put it on my kindle and started reading.
I read True, but actually haven't read Sweet yet. I did apply for an ARC way back when- but I was declined. To be honest when I got the mail for Believe, I just assumed it was the second book of the series- you know me and names? Yep, we not exactly the best of friends.  Only while I was reading Believe did it dawn on me that I should check if I missed any books in the series...
The good news these do work as stand alone. Each book is about a new couple. Though if you really OCD about this kinda thing, you might wanna stick to reading it in their order. Because it does give you minor spoilers. We talking teeny tiny. And frankly I didn't care.
Oh and a last and quite funny detail. In the mail it said I should request Sweet if I hadn't read it yet... well I did and got declined today. Good thing I bought it last Saturday on my book buying spree.

Again I found myself pondering on how to rate this. Because there are thing about this I really really liked. But other stuff that was way to cliche for my taste and to "romancy" (yep, I just said that! but there is no other word for it. Soooo, sue me!), mostly some things feel to mapped out.
I think I liked the story of Robin and Phoenix better than the one of Rory and Tyler. In fact about halfway in I would have said this one is better. Then there was an, in my opinion, unnecessary twist added - which kinda put me off.
The story line is much of the time your usual New Adult romance. Take the angst, the insecurities and some insta-lust add a hottie and a sweet girl a big blow up ... and you got it. Sounds sarcastic doesnt it? But that's what it is. Still it had me captivated and I read it in one setting. There was some eye rolling, which is to be expected. Romance and me still have a weary truce. My biggest issue was the big show down with David and I didn't get how it was supposed to have been solved at the end. It was just a tad bit to much for me.
I loved the ending though. Obviously it's HAE for the couple. But it was still left open, just pointing in the direction it was going and the different possibilities for all the characters. My favorite kind of an ending for a book. Somehow like in life a chapter is over and you go onto new adventures.

One of my issues in True was the character building was too cliche for me. So I was pleased that, while there were quite a bit of cliches all around, the character building was way better. I really liked Phoenix, I could related to his issues, his fears and saw his strengths and insecurities. Add all of that with his looks - and he makes it quite high up in the fictional hottie list.
Same with Robin. She was really well characterized. And McCarthy did a good job and making you understand where the two of them were coming from.
Funny while Robins behavior right at the beginning of the book is a total NONO. I never blamed her, because she knew she messed up and was trying to make amens.
I really love the relations ship between the friends,which is one of the main reasons I will be reading Sweet and am waiting to get my hands on Shatter.
However, the badies were really really badly written. They were just to cliche, which made me way to unrealistic. Just two black and white.

I love McCarthy's prose. It is my favorite part of the book. The way she describes things is captivating and thoughtful. The love scenes were again, sensual and hot. And very very different from the first book. The romance between Rory and Tyler was so different than Robin and Phoenix, their connection completely unique. Which is quite frankly really nice, because some of these kind of series, end up being a replay of smut and romance in each book.

There are a few things that kinda got to me. Well I mentioned David. It was my biggest issue with the book
Then there were minor things, that startled me. First the reaction of people when they found out about Robins mess-up. I couldn't believe it! seriously? Tell her to keep it a secret? Sadly I know that's how most people would react.. still I strongly disagree.
When Phoenix got his tattoo- my reaction: WTF? is he mad? that's way way too soon. The reaction of everyone else? Oh that's so nice. Uh?!!! What? really? What if it doesn't work? I mean not one person said anything in that regard. A tattoo is PERMANENT- someone should have mentioned it, just maybe? Though it did sound rad, dont misunderstand me. It sounds like a seriously cool tattoo. I just felt it was way to early. oh and Robin ink on the other hand? I want it!!
And then sadly i felt that McCarthy didn't manage to capture the feeling when you draw thing. I just didn't work for me... maybe because Art and drawing is such a personal and integral part of my life and it just means so much to me? I don't know. It felt not quite right while reading it. Like someone describes outlines rather than the whole sketch. As I said I think this one is very personal.

A Young Adult Romance that had me captivated, that was fun and moving to read. For me McCarthy has become an author I will be watching out for.
I am reading Sweet very soon, it's on my kindle- But I am really looking forward to reading Shattered!