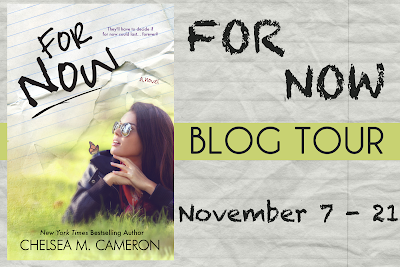 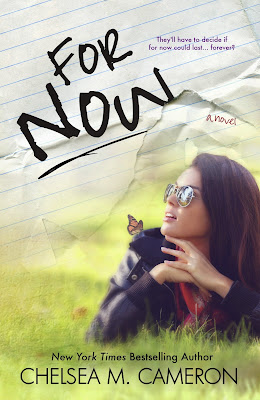 Two people. A one-night stand. What could go wrong?

Javier Cruz definitely isn’t relationship material, but that suits Hazel Gellar just fine. She’s not a relationship girl and doesn’t plan on ever being one.

But after a mind-blowing, panty-ripping, bed-breaking night, she knows once isn’t going to be enough. Fortunately, Javi feels the same way. Soon, what started as just one night turns into a lot of nights, and Hazel doesn’t know what to do.

Will she and Javi make the choice to be together for longer than just right NOW?

Chelsea M. Cameron is a YA/NA New York Times/USA Today Best Selling author from Maine. Lover of things random and ridiculous, Jane Austen/Charlotte and Emily Bronte Fangirl, red velvet cake enthusiast, obsessive tea drinker, vegetarian, former cheerleader and world's worst video gamer. When not writing, she enjoys watching infomercials, singing in the car and tweeting (this one time, she was tweeted by Neil Gaiman). She has a degree in journalism from the University of Maine, Orono that she promptly abandoned to write about the people in her own head. More often than not, these people turn out to be just as weird as she is.

My first reaction when I finished this: I sighed.
I sighed about a gazillion times.
Mind you, not an exasperated kinda sigh, no no. I sighed with gooey contentment.
If there ever was a pink and fuzzy sigh to be heard from me, this would have been the moment. BUT let's no get ahead of ourselves. There will never be anything pink and fuzzy about me, not even contented sighs.
This is so darn cute and fluffy, I just couldn't help myself. It really is a cute & fluffy fix per excellence.
Hence totally cute & fluffy contentment was my state when I finished it. Well and then, I kinda wished this was more.

Look this is really well written. Let's face is I love Cameron's prose. I honestly think she is a gifted writer. Hence I keep reading her books. For Now has just cemented my opinion on this.

The story lines is cute. It's kinda different than most of the new adult stuff out there. It definitely does speak to someone like me, meaning the commitment-phobe in me.
SO I mostly enjoyed it. Except the end was,uhm too much too sweet too convenient too sudden. But I wouldn't mind that actually. In fact I really didn't until a day later.
Because this is really a character driven novel.

You know I lurve those. Really this is all about Hazel and Javier. In fact they are nearly the only people that feature in this, except Shannon and Jett from the first book in the series, there are very few other people mentioned in here.
Again, this isn't something I noticed while reading. Because I was all wrapped up in Hazel and Javier. I really got them, I got their relationship dynamic and I really rooted for them.
But even so, I missed something here as well. I didn't get enough about their past, I didn't get enough about them. If I should describe you how Javier looks as example... Well he is hot, tall, got nice arms, tattoos... I actually know nothing about his facial features except that he has a nice jaw. That's it. And I really wanted to know!
Sadly this kinda a reoccurring thing.
I gotta admit that I actually haven't read the first instalment of the series. So I was wondering if maybe, what I have been missing in this one, I could find in the first one. Then again, this should work as a standalone after the blurb... sooo well, I guess I will let you know what the story is after I read For Real. Because I am definitely going to read it. In fact, if you haven't read it either.. let's do a buddy read. (Seriously! Contact me!) This is a must read for lovers of the genre after all!

While I love what is here, I felt I wanted more. In fact I felt like Cameron should have given me more. I think Cameron should have dug deeper and gotten me more that just cute & fluffy, I actually think she could have made this freakn brilliant.
I know that sounds kinda negative- but when I thought about it, I honestly believe that Cameron has the ability, the insight and the imagination to become one of the top writers in this genre. And with that come great expectations. I am also sure that with time she will fulfil them.

So despite my (small) misgivings this is a must read for lovers of the genre. And I will as always look forward to reading more of Ms. Cameron.