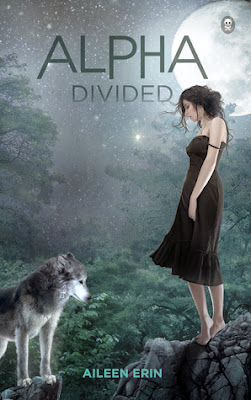 Life has been crazy since Tessa McCaide moved to Texas. She’s gone from being a normal-ish girl with visions to a super-powered werewolf. She’s fought off vampires and broken a nearly unbreakable curse. And she’s got a hot mate, Dastien Laurent, to keep her busy.

Things are looking up until the full moon ceremony rolls around. Before Tessa can strengthen her bond with Dastien, the local coven crashes the gates, demanding that Tessa—their heir apparent—be returned. If the pack wants to avoid a war with the witches, handing Tessa over is the only option.

Tessa doesn’t want to cause an all-out fight, but joining a dark-magic coven isn’t on her to-do list, especially if embracing her magic side means parting with Dastien. When the coven leader tries to control Tessa with dark-magic, Tessa realizes she has to dismantle the coven or prepare the pack for war. Either choice will change her life—and her world—forever.

Alpha Divided deed indeed leave me divided.
But let me start at the beginning ...
I was really looking forward to this one, actually. I love Erin's writing style. Well, clearly I do, since this is the third book of hers I am reading. But this series is did however change my view on shifter novels. Just when I thought, I might chalk this genre up as being not for me, I read Becoming Alpha. Her take was the same - it's shifters after all- but yet so different. And just like that, the genre was back on board.
Simple.
The second book was really good as well. But a tad bit to over dramatic for my taste... I was so looking forward to the conclusion of the series....
AND therein lies the problem. Halfway through this one, I realised this is never going to have a satisfying end. Which kinda put me off the book, until I discovered that the series is not going to be over yet! There are going to be at least 2 more books.
So this is good. But also bad.
Simply put:
The good obviously, I might get my satisfying end. The bad, it will take a while. A long while.
This is exactly where I am left absolutely divided.

Sounds so simple if I put it down like this. But seriously I promise this isn't just about having to wait at least another year to get my satisfaction. Nope. I really is not. Though that does naturally kinda suck.

As I said Erin's prose is beautiful. She is a master at getting Tessa's feelings through.

Her character building is meticulous. I have seriously grown to like the crew. In fact going back to the series was partly not quite as satisfying because half of the book did not have the crew in.
The attraction and relationship between Tessa and Dastien is sizzling as ever. I adore Dastien and somehow Erin still has me gasping and sighing on cue when ever he is around. I totally love the couple and more so I believe it. EVEN with the whole true mate thrown it. I kinda just cobble it up... which in itself is proof of both great character building and wonderful writing.

The world building is getting better and better. After exploring mainly the shifter world- in this instalment we get an insight into the world of the brujas. There is loads about magic in it. AND there is mention of fay.... not sure if Erin will will explore this part in either of the next instalment. But there will be definitely more witch and magic stuff in the next book- it being call Buja and all. So another reason to look forward to more...

But my worries honestly lie in the plot. I am worried that Erin won't be able to keep my attention. Because I found myself kinda thinking, oh more drama for nothing. Let's face it. Each book had the exact same pattern, intro and a great build up until about 40%, then big turn of events, struggling and angst until about 80%, the big show down and in the end a temporary solutions with hope for the future.

Don't misunderstand me, it works. At least it worked for the first two books, but in this one, I felt like nothing much happened in the end. I did wonder why Erin didn't write just 3 or 4 books. And at this point in time I really doubt that with this pattern she can keep me wanting more.... BUT I would be the first to celebrate if she proves me wrong.
So while divided and apprehensive I am sure as hell going to read the next instalment.