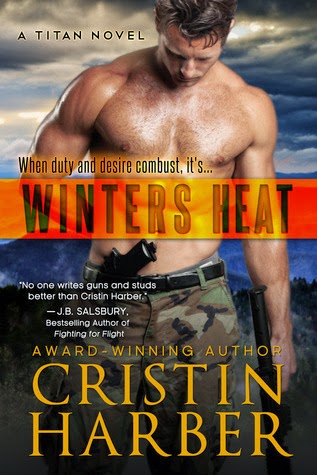 After putting her life on the line to protect classified intelligence, military psychologist Mia Kensington is on a cross-country road trip from hell with an intrusive save-the-day hero. Uninterested in his white knight act, she'd rather take her chances without the ruggedly handsome, cold-blooded operative who boasts an alpha complex and too many guns.

Colby Winters, an elite member of The Titan Group, has a single objective on his black ops mission: recover a document important to national security. It was supposed to be an easy in-and-out operation. But now, by any means necessary becomes a survival mantra when he faces off with a stunning woman he can't leave behind.

When Titan's safe houses are compromised, Colby stashes Mia at his home, exposing his secret - he's the adoptive father of an orphaned baby girl. Too soon, danger arrives and Mia lands in the hands of a sadistic cartel king with a taste for torture. As hours bleed into fear-drenched days, Colby races across the globe and through a firestorm of bullets to save the woman he can't live without.

After having read one of the novellas and book 2 in the series before I decided to start at the beginning and give this series a go... AND I did this as an audiobook, which was the best idea EVER!
I honestly think I enjoyed this way way way better read to me by Jeffrey Kafer than reading it myself. His voice... is just want this book needed. Seriously! I have in fact decided to wait for the rest of the series to be published as audiobooks -cause well, Kafer's voice is too much of an enticement to pass up.
There is allot of action, alpha dudes and some pretty good smut.. a fun suspense romance. In some ways this is nothing new- oh wait actually in many ways this is absolutely nothing new. It's same old same old. Harber has not reinvented the wheel. It isn't some great literarily feat as well. But it is well written and rather entertaining, especially when read by Mr. Kafer.
Which is possibly the most surprising thing about this. When I started this I wasn't so sure I was gonna like it- I mean the deep rather alpha sounding dude voice that was reading it... well I wasn't sure at all. But I thought to myself- oh well, thank goodness for whispersync
--BTW I really adore whispersync it's the best invention straight after my kindle, just a sidenote I need to get off my chest---
But as I said,  plenty of times now,  I ended up loving the narration. It's just how I would imagine Winters to sound like, it just worked with the alpha vibes and the action and most importantly the writing style.
So besides the usual usual this is an entertaining action cute & fluffy with a good dose of smut. If you thinking about getting it- get the audio- I promise you won't regret it!


This is your normal text here but the text inside these tags is a spoiler!. And then you can keep writing over here.
Email ThisBlogThis!Share to TwitterShare to FacebookShare to Pinterest
Labels: audiobook, Contemporary, Cristin Harber, Deniz, Review, Romance, Suspense, Titan Novel, whispersync