Review: The Shadow Throne by Jennifer A. Nielsen 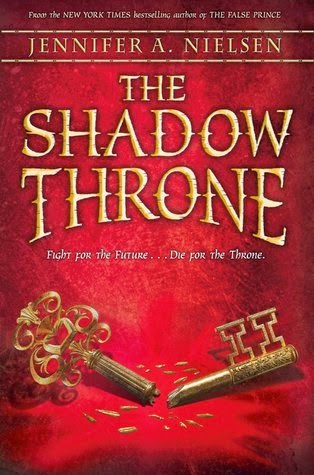 One war.
Too many deadly battles.
Can a king save his kingdom, when his own survival seems unlikely?

War has come to Carthya. It knocks at every door and window in the land. And when Jaron learns that King Vargan of Avenia has kidnapped Imogen in a plot to bring Carthya to its knees, Jaron knows it is up to him to embark on a daring rescue mission. But everything that can go wrong does.

His friends are flung far and wide across Carthya and its neighbouring lands. In a last-ditch effort to stave off what looks to be a devastating loss for the kingdom, Jaron undertakes what may be his last journey to save everything and everyone he loves. But even with his lightning-quick wit, Jaron cannot forestall the terrible danger that descends on him and his country. Along the way, will he lose what matters most? And in the end, who will sit on Carthya's throne?

Rousing and affecting, Jaron's adventures have thrilled and moved readers in The False Prince and The Runaway King. Journey once again with the Ascendant King of Carthya, as New York Times bestselling author Jennifer A. Nielsen brings his story to a stunning conclusion with The Shadow Throne.

I can't bring myself to round it up cause that would mean I liked it. I thought it was okay..considering my expectations.The last book wasn't terrible so it fares better than other YA trilogies but I'm not exactly thrilled with the story. The first book was the best in the series for me, keeping me guessing all throughout and making the entire reading experience quite engaging for me. But as the series progressed and things got more serious, I couldn't really bring myself to appreciate the flow. There is a lot of growth for the side characters. Roden specially became a very important character. But what bothers me is the happily ever after and the final showdown. It just felt too clumsily put up to impress me.

I guess the gritty fantasy books that I've been reading for most of the year have made me accustomed to harsh endings. I know it's not fair to compare this book with those fantasy novels but the ending in this book was like finishing a fairytale.

Another thing that bothered me was the writing style. I can't say if it's me or the author, but I don't remember skimming through the earlier two books. Not only that but Jaron also grew sorta boring even with all his scheming and plotting and impulsive decisions that once I found charming. I don't remember what made him fall in love with Imogen and I honestly don't care about her or the romance at all. That was definitely another big downer for me.

Anyway, on a brighter note, now I can go back to reading other fantasy series that await me. Good that you found peace Jaron. Good for you.