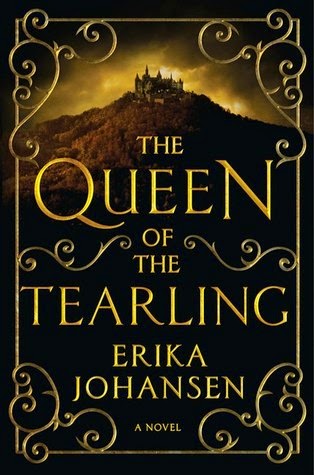 The Queen of the Tearling

On her nineteenth birthday, Princess Kelsea Raleigh Glynn, raised in exile, sets out on a perilous journey back to the castle of her birth to ascend her rightful throne. Plain and serious, a girl who loves books and learning, Kelsea bears little resemblance to her mother, the vain and frivolous Queen Elyssa. But though she may be inexperienced and sheltered, Kelsea is not defenseless: Around her neck hangs the Tearling sapphire, a jewel of immense magical power; and accompanying her is the Queen’s Guard, a cadre of brave knights led by the enigmatic and dedicated Lazarus. Kelsea will need them all to survive a cabal of enemies who will use every weapon—from crimson-caped assassins to the darkest blood magic—to prevent her from wearing the crown.

Despite her royal blood, Kelsea feels like nothing so much as an insecure girl, a child called upon to lead a people and a kingdom about which she knows almost nothing. But what she discovers in the capital will change everything, confronting her with horrors she never imagined. An act of singular daring will throw Kelsea’s kingdom into tumult, unleashing the vengeance of the tyrannical ruler of neighboring Mortmesne: the Red Queen, a sorceress possessed of the darkest magic. Now Kelsea will begin to discover whom among the servants, aristocracy, and her own guard she can trust.

But the quest to save her kingdom and meet her destiny has only just begun—a wondrous journey of self-discovery and a trial by fire that will make her a legend…if she can survive.

The Queen of the Tearling introduces readers to a world as fully imagined and terrifying as that of The Hunger Games, with characters as vivid and intriguing as those of The Game of Thrones, and a wholly original heroine. Combining thrilling action and twisting plot turns, it is a magnificent debut from the talented Erika Johansen.


The biggest question I asked myself after finishing this: Why on earth did it take me THIS long to read this?
See I've been meaning to read this for ages and ages, but I kinda forgot about it. Then I got kinda sidetracked by the different reviews of my reading buddies. There are clearly two camps: the ones who loved it and rated it 4Stars and more and the ones who loathed it and rated it 2Stars and below. No middle field.
This kinda put me off. BIG time actually.
So I just never read it. Kept thinking I really should give it a try but never did. Well, until now that is.
And for the first third of so I was sure I was going to be somewhere in the middle.
But then... well.. *looks at her rating* yeah, things clearly changed.

The story line is your classic coming of age fantasy. While there is a lot happening this volume only covers a few weeks of the story. There is a lot of views into the past, and a few glimpses into a future. It's not boring at all. But with all the action is still slow paced. Does that make any sense?  I don't know how to explain it much better, except maybe that it did keep me entertained but I didn't read this in one sitting.  Not that, that says much about the quality of the story. I feel like this is just a brink, a beginning and one is left expecting more, way more. I can't wait to get more of Kelsey's story.

The world building is interesting but one is left with LOADS of questions. Johansen left many many gaps. And halfway in I had very little idea of what was what, now after reading it, I got a feel of this new world. This place set somewhere in the future. But that's it. I am fascinated, my interests are peeked, there is much potential and I really hope there will be more world building in the next volume.

The writing style is beautiful.  Johansen paints pictures with her words. I really enjoyed reading this one. It's reminiscent of Duma, Sanderson and Williams.
With Queen of Tearling Johansen has created a memorable debut. I am looking forward to more  of her works.

The best thing about this though was by far the character building. At first I thought Kelsey silly, possibly childish, kinda spoilt. The queens guard... well I didn't have much love left for them either. Arrogant fools I thought. The villains were clearly evil... AND then slowly slowly more was added to each character, they all evolved, so much that the villains aren't just bad. There are different dimensions to each one. The regent for example, spoilt, silly as he is, one can't help wondering if things could have turned out differently, if he would have given a different upbringing.
Kelsey is a fabulous character. She does not only a lot of growing, but I ended up feeling proud of her! Yeah seriously at the end of the book, I inwardly cheered her for that moving and wonderful announcement. She is one of the most interesting and unique heroines I have encountered in a long while. For starters she ain't very pretty or elegant, she has little clue of what awaits her. She isn't a good warrior nor does she seem to have any amazing knowledges or outstanding qualities. She desires to be more beautiful and seeks acknowledgement. Well, except that she has the absolute drive to do what is the right thing. She has clearly a good education. But there is a yearning for company and to be loved. She is kinda a normalo. A very interesting starting point. As the story evolves we see that Kelsey more than anything has the ability to be just and compassionate. Which is what endeared her so much to me.
The fetch is intriguing beyond intriguing, and I really like Kelsey's reactions to him. It's sweet and makes her more like a 19year old. More human.  I got so many questions about him!
The queen's guard at first was a bunch of arrogant "older"guys with big secrets. Then they slowly became more and more interesting, individual people rather than the group. They remind be of Duma's Musketeers. And I honestly didn't see the twist coming.
As I am writing this I realise this has a huge cast. The amazing thing about it is, that I fist of all can remember exactly who is who, but more so that they each individuals to me, they have a history, their motives, their quirks... In one word the character building is brilliant.

With great power comes responsibilities, your actions do have consequences.  Those are two main themes that run through the book. And the third would be: We are shaped by our past and our choices. Which is in fact what I loved most about this book. I think those are essential truths of life and I am beyond fascinated how Johansen managed to weave all of these together to a new beckoning world

I would like to say something about the marketing, in fact many of my reading buddies commented on it already:

The Queen of the Tearling introduces readers to a world as fully imagined and terrifying as that of The Hunger Games, with characters as vivid and intriguing as those of The Game of Thrones, and a wholly original heroine. Combining thrilling action and twisting plot turns, it is a magnificent debut from the talented Erika Johansen.

Well, I think there is so much wrong about this one.
I only agree with the blue bits....I would not in fact compare this to either The Hunger Games nor The Game of Thrones. AT ALL
This reminded me of Sanderson's careful world building, William's fabulous character building and Duma's beautiful storytelling.
I would not market this as YA either. Nope.
For me this is a book for fantasy lovers. If you love Sanderson, Williams, Tolkien and Co. you should give this a try. Forget Game of Thrones or Hunger Games. Just go in with the expectation that you will get Epic Fantasy and let Johansen take you on a surprising and fascinating journey.
I for one, got exactly that and can't wait to read the next volume.