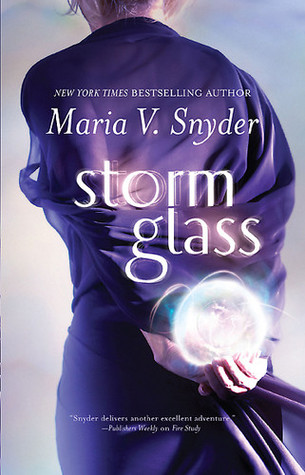 As a glassmaker and a magician-in-training, Opal Cowen understands trial by fire. Now it's time to test her mettle. Someone has sabotaged the Stormdancer clan's glass orbs, killing their most powerful magicians. The Stormdancers—particularly the mysterious and mercurial Kade—require Opal's unique talents to prevent it happening again. But when the mission goes awry, Opal must tap in to a new kind of magic as stunningly potent as it is frightening. And the further she delves into the intrigue behind the glass and magic, the more distorted things appear. With lives hanging in the balance—including her own—Opal must control powers she hadn't known she possessed… - powers that might lead to disaster beyond anything she's ever known.

Great start to a new trilogy in the same world as Yelena and Valek. Forgotten how much I missed all those characters, and now there are new ones that I'll be missing! (Read: Kade).

Snyder is just so good at making her characters come alive, and their character growth! Even the villains never remained static. Opal has her issues, which is totally understandable because of what happened in the Study series. Just because it's understandable didn't mean I didn't want to shake her a few times so she would get that she was awesome! Her self-esteem and confidence issues were astronomical. BUT! She slowly starts coming into herself. She starts seeing the flaw in her thinking that she is useless, that she doesn't amount to much, etc, and Snyder just does it so well.

The even better part is that it's not just Opal doing some growth, it's everyone else too. It's Kade getting through his sister's death and accepting his growing feelings for Opal. It's Zitora figuring out how to get people to respect her Master Magician status.

The plot wasn't half bad either :P There was one major bit that leads to the main show down which I thought was ridiculously obvious and yet Opal was so damn oblivious. Like not even a tiny seed of doubt or suspicion about the whole thing. Trying not to hold it against Opal and Snyder too much though:P

All in all, great start and now, on to the next one!


(click on the name for reviews of this geek)