Review: The Striker by Monica McCarty 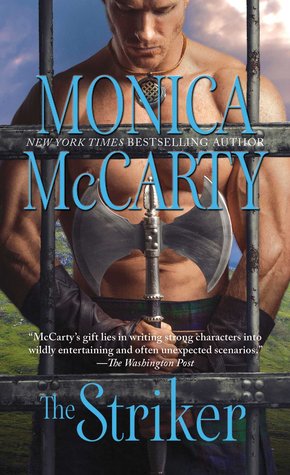 
Six years ago, Eoin "Striker” MacLean endured the greatest betrayal of his life, a disaster that led Robert the Bruce to a crushing defeat and left Eoin without the spirited woman who ruled his heart. Eoin knew that falling in love with his sworn enemy’s daughter was risky, dividing him between a possessive desire for beautiful Margaret MacDowell and an undying loyalty to his king. He promised Bruce that he would keep his fiery bride in the dark about the elite Highland Guard, but he could not predict the dire consequences his secret would have on his young marriage. Nor could he foresee how surrendering to temptation could cripple Bruce’s cause, forcing Eoin to blame his wife—and himself for trusting her.

Now, as Bruce prepares to challenge the resistance’s remaining strongholds, Eoin finally has his chance for revenge against the woman he once loved so fiercely and her entire clan. But when ferociously independent Margaret reveals a surprise that unites her with Eoin, neither of them will let their love go down without a fight


Another great installment by McCarty. I should say, that I thought this would be the end of the series- but after finishing The Striker I discovered to my utter delight, that there will be at least two more novels to come!

I am still a bit shocked at how much I like this series. I mean, I am miss-why-read-those-highlander-novels-cause-they-are-so-far-off-reality-they-might-as-well-be-called-fantasy-without-worldbuilding.
Then I stumbled over the Highland Guard Series and ate humble pie.
So I thought, I was so wrong, I've read quite a few books in this genre, but somehow, so far at least, they all a tad disappointing. First they all seem to have no clue about the Scottish climate.  NO ONE runs around the highlands in thin frocks people! It's mission impossible.. and why does the sun always shine in those novels? Which alternative universe are they talking about.... But I am getting off track.

My point is that after reading The Striker two things became really clear to me:

McCarthy does describe the Scotland I know- and love. And she does a really amazing job at it. I feel like I've revisited my former home, when I come up for air in between reading. Her descriptions are accurate, realistic and capture the beauty of Scotland amazingly. Which speaks for her amazing skill as a writer but I keep wondering how much time McCarthy has spent in the Highlands. Her descriptions of places ( that I know really well) are just amazing. I simply don't have another word. They are evocative and exact. I am sadly not good with words so I fail at describing the incredible beauty that McCarthy creates with hers.

The historical setting is brilliant. I love the authors notes at the end of each book. And while I am quite knowledgeable in this particular part of history, I am always amazed by McCarthy's research. Even more by how she takes historical facts and creates characters that seem real.  Again a tribute to McCarthy's great skill at her craft. This novel is cleverly interwoven in the historical setting, pivoting  around the battle of Loch Ryan.

The story line goes over several years. I actually love how there was a back and forth. Slowly we could reconstruct the events- some of which we already knew from previous books in the series, but revisiting them from a different POV and with additional details.
This is definitely a second chances romance. It all starts with total insta-lust. And ooooh all the sizzles, I tell you the chemistry between Eoin and Margaret is palatable- and that keeps up until the end of the book.  Which leads me to the smut. Just as always McCarty does not dissapoint when it comes to the smexy stuff.  It's hot hot hot.
And then the two MCs behave totally annoyingly stubborn and immature and all goes to hell. My heart was breaking for most of the book.  This is not a sweet little insta to HEA ending novel. No, this is heart wrenching, sad and utterly infuriating. In all the best ways. In one word: It's intense. Very intense. I felt every turn of their journey. I wanted to console them and shake them - actually smack them most of the time. And I totally enjoyed the ride. Just be warned it's not your easy going and sweet romance story line
I honestly did question their love. It was all a bit too insta for my taste. I kept thinking this is all just lust- they completely mistaking sexual attraction with love. And to McCarty's credit they do question it themselves. Though I do believe they end up caring for each other now after finishing it, I found myself doubting them until the epilogue really.

I think Eoin and Margaret are two of the most flawed characters ever written in a Highland romance, ever! And I totally adore that. They behave like utter idiots at times, but I understood where they were coming from. I like both of them and believed their mistakes were at times to do with immaturity.  I also believed when they reformed some of their faults. Both, Margaret and Eoin feel like real people, probably exactly because they are flawed. They are also complex and interesting - and I like them both, I could identify with both of them.
Just like the previous novels, this one is character driven as well. And in my opinion it's intensity (and stupidity) is bearable because of the character growth the two MCs go through. And just like always I really enjoyed revisiting the other members of the crew. They all feel so real. It's amazing to see the characters from a different POV in each book. I love how one sees a different side of them, but how familiar they have all become.

So another AMAZING installment to my favorite Highlander series. And as I said the good news there will be at least two more books. In fact I already read The Rock- and well, let me just say it is good...(I shall post my review next week) and I am waiting to get my hands on The Ghost, desperately, while hoping that there will be MORE.

Until then: Get your hands on The Striker, find a quiet corner and go to the Highlands for a few hours. You won't regret it. I promise.