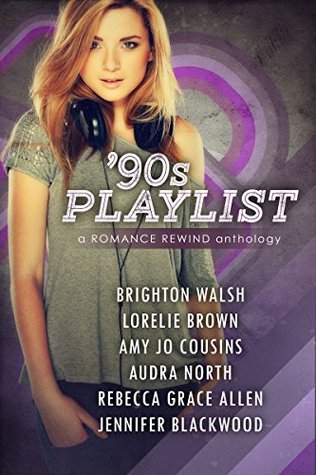 Six stories of sex, love, and being young in the ‘90s, inspired by songs of the decade…

My Strongest Weakness by Brighton Walsh
It was supposed to be a one-time thing. No one would find out; no one would have to know. And then once turned into twice, and twice turned into several times a week, and now pierced, punk-loving, rebellious Tia Lanning is banging Mason Brooks, the big man on campus and Mr. All American. But banging him isn’t the problem. Falling for him is. Especially when he’s content to let her remain his dirty little secret.

Worthwhile by Audra North
Jill didn’t expect her semester in Leeds to start with getting dumped by her boyfriend. Especially since she only came to England to be with him. Two weeks in, all she wants to do is go home. Finding love with someone new is definitely not an option. But when she literally stumbles into grad student Stuart’s arms, her experience abroad becomes a lot more worthwhile.

Creep by Lorelie Brown
Roni lives for the raves in Oakland’s warehouse district. Dancing till dawn in white gloves under black lights breathes life into her soul. Nothing will get her kicked out of her underground world faster than turning over Skittles, her dealer. She refuses to provide info about the underage runaway to his big brother Tom. But Tom is going to find Skittles with or without Roni’s cooperation. But Tom is special. He’s rich, handsome and bold. Roni wishes she was special. And like the rave scene she loves, nothing lasts forever.

Smells Like Teen Spirit by Rebecca Grace Allen
Rory Stone's days of grunge and poetry are behind her, her reality now in bags of Arabian brew, and counting the change in the tip jar. Can indie singer James Griffith rock her muse back into the present?

The Belle vs. the BDOC by Amy Jo Cousins
Shelby Summerfield is a gold star lesbian, even if she doesn’t look like one. Florence Truong is the only other dyke at Carlisle College in 1993 not wearing plaid flannel, and Shelby sets her sights on seduction. But instead of a delightful tumble in the sheets, Florence calls her out for being a straight girl. With seduction off the table, Shelby settles for revenge for her humiliation. But if all she wants is to show up her campus rival, how come Shelby can't stop herself from saving Florence instead of annihilating her?

Little Red Thong by Jennifer Blackwood
Emily Jones is ready to embark on the most epic spring break trip of her college career with her bestie, twin brother, and her brother’s best friend, Chase. Chase has been in love with Emily since the eighth grade when she kicked his ass in laser tag. He’s not going to piss away his last chance to tell her how he feels. When the group decides to play a game of Spring Break BINGO that involves body shots, a red thong, and secret hookups, this is the perfect catalyst to get him out of the friend zone. But as things get heated, they have to decide if twenty years of friendship is worth putting in jeopardy because of a game, and what will happen when they hit dry land.

I liked the idea of this, I am a 90s girl after all.  This was in general your typical cute and fluffy- with a tad bit of smut thrown in. Quite nice for reading in between.  I was wondering if the authors chose the songs or if they were given the songs? Gotta say that they all got the song/story absolutely right.
And since I enjoyed this one so much I am looking forward to the next book in the series!
IMO if you were in your teens or a young adult in the 90s this is a must read.

My Strongest Weakness by Brighton Walsh

Song: If by Janet Jackson
Enjoyed My Strongest Weakness very much. Well at least the second half. I wasn't so sure about the first half- a wee bit to insta-lust/love and all that.
Still a neat, smexy little story that reminded me of the breakfast club.
A rather grown up version of it naturally
3.5 Stars

Song: Half a World Away by R.E.M
Super cute and sweet.
A wee bit of an insta thingy going on- but it really didn't matter to me.
I loved Stuart! The smut and well the entire cute & fluffy thing.
Perfect fit for the song!
The only negative thing: it ended a bit too fast and way to abrupt for me
4 Stars

Song: Creep by Radiohead
I actually love love love this song. And while I found the story a bit too short and way to insta- It was so 90s, so in theme with the song- I actually didn't care that much about the very suddenness of all of it.  Though it is my biggest issue with this story. I am totally a 90s girl- somehow Brown invoked that time in every detail, more importantly Creep would totally be the theme music for this story. Colour me amazed.
3.5 Stars

Song: Smells Like Teen Spirit by Nirvana
I think this is my favorite story so far. I luv James. Adore him in fact. And while there was total insta-lust. In fact things felt much less insta in compare to the previous stories... I like the scene, this is set in as well. I found Rory a tad too over the top at times- though I did like her. One thing though? Artisan sourdough bread? I could be wrong- but I think that's a thing of the 21st century.  In fact I am not sure that the whole 90s feel came through in this one.
4 Stars

The Belle vs. the BDOC by Amy Jo Cousins

Song: Possum Kingdom by The Toadies
SO how to rate this? Cause honestly it's not really my cup of tea. I mean the romance part. I liked the story line and the writing style. BUT I am not into F/F.
And again... the story and song just perfect.

I am giving it a 2.5 Stars- but with a heavy heart. Cause I love the idea behind it, just not for me.

Song: The Thong Song by Sisqo
I don't have fond memories of this song. It seemed to play all the time, which makes any song annoying but more than that I never actually liked it. Because of this, I was a tad worried about this story. But the story was cute, your classic brothers-bestie kinda thing. I think the story line is a bit of the usual usual- but what made this shine was the characters and the setting. I loved the cast- especially the two MCs.
Blackwood got the whole 90s feel right, made me feel like I am very young again. And the annoying song? Played all the time, just like in the nineties.
3.5Stars