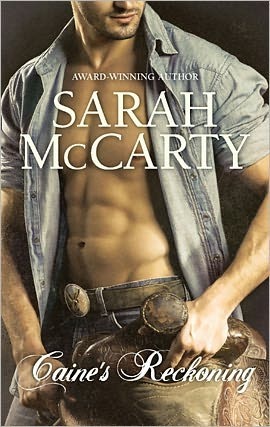 The Hell's Eight is the only family he's ever needed, until he meets the only woman he's ever wanted...

Caine Allen is a hardened Texas Ranger, definitely not the marrying kind. But when he rescues a kidnapped woman and returns her to town, the preacher calls in a favor. One Caine's honor won't let him refuse.

From the moment he beds Desi, Caine knows turmoil will follow. Desi might have the face of a temptress, but she also has a will of iron and while she needs his protection, she's determined that no man will control her again. They establish an uneasy bond, but it isn't enough for Caine. He wants all Desi has to offer. He wants her screams, her moans, her demands...everything. Yet there's still a bounty on Desi's head, and keeping her sexually satisfied is proving easier than keeping her alive.


Not quite sure how this ended up on my kindle... It's been there for a while. For some reason I thought one of my GR friends liked the series?... but I wouldn't be able to tell you who..
Anyway.
I liked reading a western for a change. Loved the crew. All the bit's of the ranch life was awesome.
Desi and Caine were interesting MC. Their romance is different and very sweet. The character building is done well. The villains are mean- but in an multifaceted way. The Hell's Eight, interesting...I want more of The Hell's Eight!
McCarty did a good job of depicting the hard life of the west, though there were moments where I wondered if anyone would have spoken like that..
It's a good western romance- how authentic? I wouldn't know to be perfectly honest. I actually got most of my western education through movies. And from my POV this is a good one. A rangy, well written, romantic western.


I liked how their relationship grew and how they slowly got to know each other and all that.
The storyline is interesting. But there are a gazillion questions unanswered. And the end was let's throw in another sex scene and solve all their problems and we all set...
The epilogue is rather sweet. And it gave me hopes that we get the answers in the next book. Except how did the Hell's Eight find out who the perpetrators were? Again- too sudden results- especially considering the length of the book.

My absolutely biggest issue?
The smut. First too much of it - well for me at least - and then also most of Caine's and Desi's transactions were set around it- while I loved their banter outside the smut-scenes there was way to little of it for my taste.

I am intrigued enough to read the next book. (I might skim the smut next time around lol)

So if you enjoy smut more than I, this is definitely something to put on your TBR.