Review: The Rock by Monica McCarty 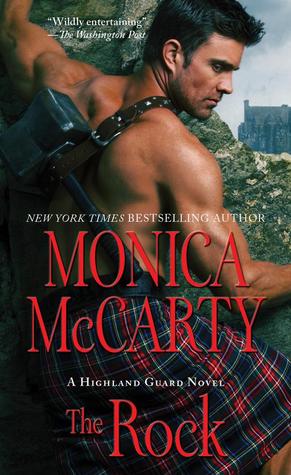 The first time he caught sight of Elizabeth Douglas, Thomas MacGowan thought she was a princess. To the son of the castle blacksmith, the daughter of the powerful Lord of Douglas might as well be. When it becomes clear that his childhood companion will never see him as a man she could love, Thom joins Edward Bruce’s army as a man-at-arms to try to change his lot. If he’s harbored a secret hope that he could close the gap between them, he faces the cold, hard truth when Elizabeth comes to him for help. She might need the boy who used to climb cliffs to rescue her brother from the hands of the English, but she would never see the son of a smith as a man worthy of her hand

These just get better and better!
I swear each time I finish a book in in the series I am sure it's my absolute favorite, then I read the next and feel the same. I was so looking forward to reading Thom story. I can't believe McCarty managed to exceed my expectation - AGAIN.
Well, this one definitely is my favorite in the series...
.. for now
;)

Funny enough I read this right With Every Breath- and I would have told you before I started this, the two books could not be more different. One is a new adult set in Patagonia and this is a historical set in Scotland. But there are many parallels between the two books and why I liked them. First both heroes- are broody, melancholic dudes- ripped and super hot... Both are from the Highlands and both are mountaineers.
Why am I mentioning this?
Weeeeelllll... I think I got a new favorite genre: Scottish mountaineer hottie romances
I really think it's a thing. Seriously, it defo beats the usual highlander romps. Any day.
But seriously, both books are set in mountains. Both heros love them and both of them a climbers. And both authors  get the setting and the whole environment, the feelings, the quiet and the majesty of the mountains just right. Both books have beautiful descriptions, made my heart ache and leap, are well written and clearly extremely well researched. While Riley chose a setting that is on my bucket list, McCarty's setting is well known to me.
I lived in Scotland for a while. I even did some of the climbs she describes. And let me tell you, it was like revisiting them.
In fact this made me wonder once again how much time McCarty has spent in the Highlands.

Her descriptions are gorgeous and so accurate, it's like I was there again. I can not stress how awe inspiring that is for me. McCarty clearly is a master of her craft.
I fell in love with this series, because of her beautiful prose. So there is no surprise there. But each and every book manages to surprise me, with it's beautiful descriptions of Scotland, the  clever weaving of the fictional with the historical and the great character building.

The Rock wowed me even more. First the mountain-climbing aspects were awesome. But more than that- this book is set between different events and between previous books. If you read the other books of the series, you know about the two MCs already.Elizabeth and Thom both make appearances in other books. Thom more so than Elizabeth, and I was super excited to read about Thom's story. Since he featured in the last two books- and I took an instant liking to him. So I had quite high expectations of this one. Possibly higher than usual... Still McCarty managed to surprise me and exceed my expectations. The historical aspects of the series are getting better and better in my opinion. McCarty interweaves the historical with the fiction in such a clever way it feel extremely real. Her stories though fictions seem possible. I find myself wishing they were true- which in itself surprises me, because we all know I am way too unromantic for something like that. But McCarty manages to bring the romantic out even in me.

While the setting is historically driven- and again extremely well done- the story line to a degree is driven by those historical events. On top of that McCarty adds her romance story. This one, like all the others is in some ways your usual romance. But McCarty does give it her own twist each time. And  romance in The Rock is about trying to breach different social standing. To be honest, I don't actually think that Thom and Elizabeth would have had much of a chance in the real world, simply because their relationship would have been a total faux-pas. But McCarthy does kinda make me believe it would have been possible. Well, she makes me hope so at least. See? She brings out the romantic in me!

The character building is just like always, really well done. I didn't like Elizabeth much for most of the book- but I did get where she was coming from.
Thom on the other hand-- gosh, I don't think I liked any of McCarthy's heros better than him. And let's just make that clear, I love them all! But Thom. SIGH. As I said before I seem to have something for melancholic, broody, stubborn, honourable, mountaineering Highlanders.
Just like in the previous books, I loved to get glimpses of the rest of the crew. McCarthy is brilliant at showing a different side to the characters when seen from a different POV. Each book makes me wonder how the Bruce really was, I like to believe, he was like McCarthy describes him. In fact I feel like someone, who was there, told me about that time and those people. That's how flawless her character building is.

So officially my favorite book by McCarthy and an absolute must read!