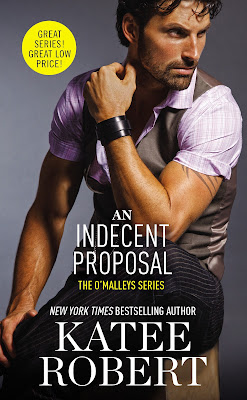 Greed. Ambition. Violence. Those are the "values" Olivia Rashidi learned from her Russian mob family-and the values she must leave behind for the sake of her daughter. When she meets Cillian O'Malley, she recognizes the red flag of his family name…yet she still can't stop herself from seeing the smoldering, tortured man. To save her family, Olivia sets out to discover Cillian's own secrets, but the real revelation is how fast—and how hard—she's falling for him.

Plagued by a violent past, Cillian is more vulnerable than anyone realizes. Anyone except Olivia, whose beauty, compassion, and pride have him at "hello," even if she's more inclined to say good-bye to an O'Malley. While his proposal of sex with no strings seems simple, what he feels for her isn't, especially after he learns that she belongs to a rival crime family. Cillian knows that there is no escape from the life, but Olivia may be worth trying—and dying—for. 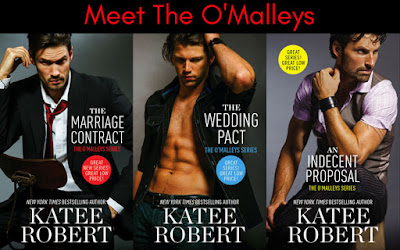 The Wedding Pact, #1
The Marriage Contract, #2
An Indecent Proposal, #3

Katee Robert learned to tell stories at her grandpa's knee. Her favorites then were the rather epic adventures of The Three Bears, but at age twelve she discovered romance novels and never looked back.
Though she dabbled in writing, life got in the way-as it often does-and she spent a few years traveling, living in both Philadelphia and Germany. In between traveling and raising her two wee ones, she had the crazy idea that she'd like to write a book and try to get published.
Her first novel was an epic fantasy that, God willing, will never see the light of day. From there, she dabbled in YA and horror, before finally finding romance. Because, really, who wouldn't want to write entire books about the smoking-hot relationships between two people?
She now spends her time-when not lost in Far Reach worlds-playing imaginary games with her wee ones, writing, ogling men, and planning for the inevitable zombie apocalypse.


Top 5 Netflix shows (or TV shows if you don’t have Netflix):

Sense8 – This show is one of those that, if you’ve seen it, you know EXACTLY why it’s on this list. If you haven’t… What are you waiting for? Go. Watch! Give it 2 episodes, because the first very much thrusts you into this world and expects you to find your feet, but it is SO worth the payoff. You have a diverse cast with diverse characters in settings across the world. You will laugh, you will cry, and you will be baying at the moon for season two (it’s coming! I promise!)

Jessica Jones – Oh, the feels. Jessica Jones has some of the most compelling characterization of the aftermath of an abusive relationship and rape that I’ve seen to date. It’s dark. It’s definitely a slow-boil story, and she’s self destructive to a clinical degree…but you can’t look away. And the emotional payoff at the end is just perfection.

Daredevil – So I loved the first season. The fight scenes are great, and Matt and Foggy’s relationship is gold. But season two is where I just lost it because of one character—Frank Castle, the Punisher. That particular character has been played before and played well (depending on who you ask) but his portrayal in this season was just… God, I have no words. Raw and dark and completely, heart-wrenchingly relatable. I can’t wait for him to have his own season (and to see him again in other Daredevil seasons?).

Empire – This is a new-to-me show. It was on my radar, but I finally got around to watching it this month…and promptly binged the entire first season. The music is amazing, the family dynamics are on point, and the plot unravels so pitch perfect. Cookie and Lucious give me life (even though I want to punch him in the throat 75% of the time).


UnReal – This show is one of the most compelling on television right now. Seriously. The characters are all complex and, let’s face it, not particularly good people. But you can’t look away, and you end up rooting for them despite yourself. Rachel and Quinn have one of the best and most nuanced friendship that transcends everything around them. If you haven’t watched this show, I’m not above shoving it into your hands. I love it SO SO much! 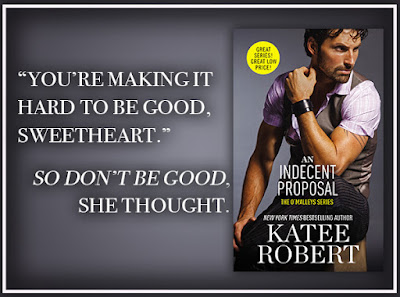 I think I gotta start with the fact that for once I've actually been super good and read the series in order. Which is a feat for me, hence I feel it needs some mention. But saying that.. you actually don't have to. Each book could stand on it's own. So if you like me, don't care for minor spoilers- then, go ahead and read which ever book appeals to you most first. Then again, there are the minor spoilers. But more importantly Robert prepares her readers for the next books, with POV of the following characters...
Anyway, I have read all of the O'Malley book thus far. And I am looking forward to the next one. In fact I actually am desperate to get my hands on Aidens book. But let's me not get ahead of myself. (or the author there hasn't even been said there would be a book for him)

I am still totally into the irish mob theme and Boston. In fact Robert is extending it to other places , which I wholeheartedly approve of. I like the dark and gritty backdrop, the ruthless world that this is set in.
I like the hard choices the characters have to make. The power games behind moves, loyalty and all that.
I have honestly not a clue if this is at all accurate and has anything to do with the real life mob scene in the states- in fact after finishing it I started googling, and I think it does certainly touch on reality- but I decided I don't really care, I like to think that Robert did a smashing job at it, and that this is as real as it gets.

The romance was a lot insta but also a lot slow and intense. So while not really my cup of tea, also totally down my alley.
The plot is fast paced and has plenty of action. I enjoyed the storyline.
The character building is interesting. I mostly liked it, with some minor exceptions. Robert is carving out a group of people and a scene slowly over the cause of the series this far, that feels quite real.
I love Cillian. He has been my favorite character from the start and An Indecent Proposal just reinforced that.
Olivia came across as a petulante brat in the beginning, but soon I ended up liking her and more importantly I got where she was coming from.
I like the support cast as well. Robert is slowly adding layers to side characters we met before and I am immensely enjoying that.
There are two exception to this however: The first is Sergei- just too over the top for me. His actions at the end made little sense. He went against everything he was supposed to be, every action he had taken before that point. I get revenge and all that, but the way he was toward Dmitri was over the top considering this happened in a matter of a few days.
The second Hadley. On the one hand she seems way older and on the other not old enough. I didn't get the feel of a girl her age. She felt like a token rather than an actual character. A fact that really grated on me.
Then there is the smut... I am not a huge fan of lots of smut - and this one has less then the previous one ( =happy deniz) buuuut it's not really for me. It's to slambang in the alley for me. Saying that however, I also have to say, that I am aware that I will be one of the very very few who feel like that. Most people with love it. It's hot and heavy and sexy.

I think this is my favourite book in the series so far. And while I wasn't sure I'll be all excited for Sloan's book.. Well, I can't wait to get my hands on it now!! 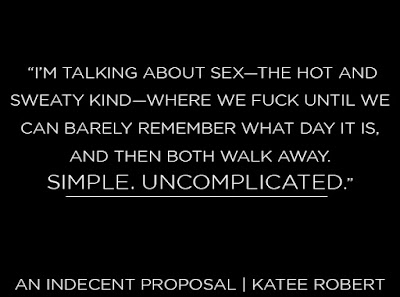