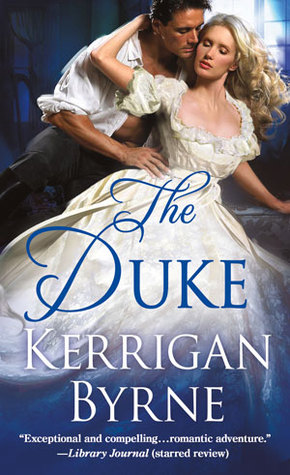 He is noble, notorious, and takes no prisoners...

They say that now His Grace, Collin Talmage, Duke of Trenwyth has only one hand, he might finally be a mere mortal, but no one seems willing to test the theory. Rich as Midas, big as a Viking, beautiful as Adonis, and lethal as a feral wolf, he is the English Empire’s golden son. But now he’s lost everything. Most of his family died in a terrible accident, his protégé and closest friend betrayed him on the battlefield, and his left hand was cut off while he was a prisoner of war. The only thing that’s kept him going until now is the memory of a night spent in the arms of a mysterious raven-haired woman almost a year ago…

Imogen Pritchard is a nurse by day, but a fallen woman—and a spy—by night. Seduced on the job years ago by a Duke who mourned for the loss of his family, Imogen has never shaken the memory of the man’s despair—or the fathomless depths of pleasure he brought to her. But as the threat of betrayals, blackmail, and secrets abound, Imogen and Collin are thrown back together in a dizzying swirl of dangerous games and earthshattering desire. But can their love overcome the everything that threatens to tear them apart?

In one word: devastating

In the best possible way.
Devastatingly beautiful, slow, heartbreaking, moving and satisfying.
This is my favorite in the series so far. And the fact that I am going to have to wait for the next novel until October 2017.. rather devastating as well.

I adore this series. In fact I started reading it because it was compared to Monica McCarthy's novels. And while this is very different, it is similar that it is extremely well historically researched - while the characters are fictional it feel very authentic and real.
And it's really really well written. Byrne's prose is as I said before devastatingly beautiful. Her language is rich and descriptive reminding me of some of my favorite classics. Her descriptions are evocative.
I found myself stopping every now and then and marveling over how to a point a sentence was or how beautiful a scene was described.
It's an utter pleasure to read! Byrne is a master of her craft.

The story line is a insta-attraction turning into slow burn star-crossed lovers. Let me warn you, the romance is very slow burn, so much attraction and so little action. And we all know I am not huge on smut. BUUUT after like 3/4 of the book I was wondering when oh when they will finally get their act together. I was desperate for at least some smut... or something other than the devastating gap, yearning and attraction.
But there is way more to this than romance. There is an account of the dark side of Victorian times and a mystery as well. So I kept anticipating, guessing and enjoying any kind of sparing during all this immensely. It's if you put the slightly insta thing in the beginning aside: It's absolutely perfect it you ask me.

And yet I would say this is character driven. Or maybe it's just that the character building is so very masterfully done. And I am totally take by each one of them. The entire cast feels real. It's interesting to revisit the characters from previous books as well. Just like I expected, this is about a dark, tortured hero, that is strong, kind, lonely,disillusioned and extremely stubborn. And a strong, sweet, charming heroine, who is carving her own path in the Victorian era. While this is the overall similarity of all the MCs in the series, they each one unique. Their stories while each one delves into the dark side of the time, unique. It think Imogene is the reason this is my favorite , because she is incredibly brave. I connected with her through her love for art. But more than anything I fell in love with her, because she despite her difficulties she faced in live she was moved on and not only that she uses her advances in life to protect the ones who are not as fortunate. She is a brilliant light in the middle of darkness.
But she comes with her own insecurities and her own past, which makes her relatable and realistic.
Cole is has a whole lot of past to deal with. He is such a hot, tortured and arrogant prick - he totally broke my heart. But his POV steal endeared me and broke my heart all over again. A fierce man with such tenderness. Totally swoonworthy!

I am dying to hear what and more importantly who the next in the series is about. I am atm rooting for the inspector.. but then again I don't really care as long as Byrne keeps writing these novels I will read them!

A MUST READ for lovers of the genre!