Blitz: Journey to the Rift by Cathi Shaw 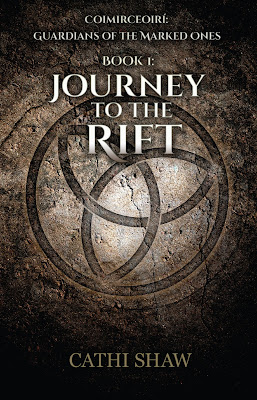 Journey to the Riftby Cathi Shaw

Summary for Goodreads:A dangerous quest into a forbidden land wasn’t exactly what Brijit Carnesîr was planning after her graduation from the Academy. For years she has looked forward starting her life as a member of the Coimirceoirí and she is thrilled to discover that she has been chosen as the Academy Apprentice of her year. But despite the fact that she has been longing to go to Séreméla and work with the Elders, it soon becomes apparent that her fate isn’t as rosy as it appears to be. First, she is paired up with a grumpy male apprentice from Stone Mountain, Weylon Forborrow. Second, it doesn’t take her long to discover that the Elders are not taking her to Séreméla, as tradition dictates. Instead, Weylon and her are sent to The Rift, a dead land tainted with evil. Even before they join the Elder royalty at Tèarmann, an ancient fortress on the cusp of the Rift, Brijit discovers that the Elders are hiding too many things. She is given the task of helping the Princess in birthing the long awaited Queen of the Elders but nothing is as it seems. There is talk of an old and forgotten Prophecy, Weylon is attacked by a creature from the Rift and her grandmother is killed, after revealing a secret that rocks everything Brijit knows about her past. Soon Brijit questions everything she had been led to believe and, worse, she realizes that the future of Séreméla and all of Five Corners is in jeopardy, unless she can find a way to save it!

Cathi Shaw lives in Summerland, BC with her husband and three children. She is often found wandering around her home, muttering in a seemingly incoherent manner, particularly when her characters have embarked on new adventure. In addition to writing fiction, she is the co-author of the textbook Writing Today and the true story, Surviving Logan.

The Elders took the known pieces of the Prophecy as law. But a complete copy of the ancient text had not been found, and much of the writing on the scraps had never been translated. At first this was because it wasn’t seen as important to modern-day Séreméla but later, as the Prophecy’s following grew, the Elders found they were unable to translate the bits of the document in their possession because it was written in an ancient Elder dialect that was almost completely forgotten today. Only the Draíodóir and a few ancient Elder scribes knew anything about the dialect, and none of them were fluent in it.
It was due to their devotion to the mythical writings that the Elders had been waiting for a female ruler for twelve generations. Of course if the first child born to the current royal family was a boy, he would be much loved, but it was understood that he would only be a Crown Prince, like his father. The Elders had been without a queen for many years, and their hopes lay with the child sleeping in the princess’s womb. Only a queen could make decisions for the Elders without needing guidance from the Elder Council.
As Weylon understood it, not everyone wished this girl-child would come. There were some who wanted the princess to give birth to a son. Then there would be no official ruler, just another Crown Prince who would be guided by the council. The Elder Council was split between wanting a queen and wanting to continue to make most of the decisions for the people.
It was more than politics behind the Elders’ wish for a queen. Weylon did not understand it all, but he sensed the growing desperation in the Elder Council members who had met with Gregor and the other senior Coimirceoirí. There had been many closed-door meetings that Weylon could not access, even with his abilities. Those meetings had been carefully shielded, which was suspicious. He had heard snippets of the Prophecy mentioned as well, but when he had pushed Gregor on the topic, his mentor had become angry and silent.
There was so much Weylon did not understand, but he knew enough about politics to know that he and the Coimirceoirí female apprentice were stepping into a potentially dangerous situation.
Finn shifted beside him, sensing his dark thoughts. But Weylon kept them to himself. The less his friend knew, the safer he would be.
“Do you know where you will be sent?” Weylon asked, changing the topic abruptly.
Finn nodded slowly. “The Wastelands.” His tone was flat.
Weylon looked at his friend closely. Finn looked miserable. “Why would they send you there?”
It didn’t make sense. The Wastelands were on the outer reaches of the Outlands. While they were farther south than The Rift, the land there had been touched by the evil, long ago. Nothing grew in that part of Five Corners and as a result, almost no one lived there. It was unheard of for the Elders to send two Coimirceoirí there.
“I don’t know,” his friend answered with a dark expression. Finn was a gifted Coimirceoirí, not as talented as Weylon, but, in any other year, he would have been one of the top picks of the class. He just had the misfortune of being Weylon’s peer.
“Who are they sending with you?” Weylon couldn’t help asking, trying to imagine which of the silly girls would be accompanying his friend.
“No one.”
Weylon stared at him in disbelief. “They never send Coimirceoirí apprentices on assignments alone.”


Finn gave him a bitter smile. “I guess they do now.”
Email ThisBlogThis!Share to TwitterShare to FacebookShare to Pinterest